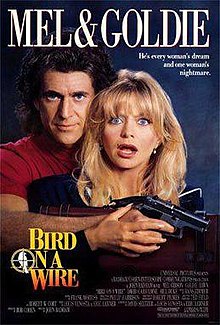 Brief Synopsis – A wealthy attorney comes across an old flame who is under protection from the Witness Protection Program.

My Take on it – This is a film that I remember hearing about when it came out thirty years ago and despite being a fan of the work of both of these stars, I never got around to seeing it until now.

The film is presented in a fun way and the chemistry of Goldie Hawn and Mel Gibson is quite electrifying yet the plot itself is far too bland for its own good.

They fail to develop any of the character on more than a superficial level and that hurts things too much because we want to care about them yet have no reason to do so.

The plot itself feels quite unoriginal or innovative in any way and much of it feels as if it is far too reminiscent of other films in the genre.

Gibson’s star was still on the rise when this was made yet they somehow failed to capitalize on that stardom.

Loved seeing Stephen Tobolowsky, a formidable supporting actor play a character very different from the kinds he usually plays and this shows how talented an actor he can be because he is quite convincing in this role.

Bottom Line – Fun film due to the partnering of Hawn and Gibson who have great and electric chemistry together, but the story itself is  a bit too bland. The characters aren’t developed well enough and it’s so hard to care about any of them or about anything that happens here.  Much of the plot feels quite unoriginal or fresh and is far too reminiscent of other films in the genre. The film wasn’t able to capitalize on Gibson’s rising popularity at the time.  Loved seeing veteran supporting actor Tobolowsky in a role very different from what he usually plays and that helps show his diverse acting ability.

MovieRob’s Favorite Trivia – Goldie Hawn did most of her own stunts, after being convinced by Mel Gibson to do so. She was originally reluctant to perform them, fearing the harsh and overwhelming nature of the tasks. She was eventually so pleased with her stunt performances that she kept her stuntman’s jacket after filming resumed, and as of 2017 still exhibits it next to her Oscar statuette. (From IMDB)