This month’s genre has been chosen by Paul of Silver Screen Classics and we will be reviewing our favorite New York Films of the 70’s.

Please get me your submissions by the 25th of Jun by sending them to NYC70spaul@movierob.net

Let’s see if I felt that this movie would be worthy of being in the company of my others favorite movies in the genre of New York Films of the 70’s…. 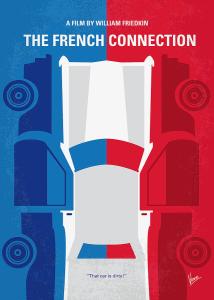 “That car is dirty, Cloudy. We’re going to sit here all night if we have to. ” – Jimmy ‘Popeye’ Doyle

Brief Synopsis – A detective tries to stop a French criminal from bringing in a large shipment of drugs to New York City from France.

My Take on it – This is a film that I’ve seen a few times over the years and have always enjoyed it despite feeling that something is missing that would have made it even more powerful a film.

Gene Hackman made a name for himself here playing the lead role of Popeye Doyle and his powerful performance helps elevate the story.

The character has become quite iconic over the years and is largely credited with being one of the base lines used in films every since as to what is the most effective way for a detective to work and that is by using his wits and his gut instinct when chasing criminals.

He was quite deserving of his Oscar win for Best Actor for his work here.

They find a way to keep the story extremely thrilling the entire way through and that has much to do with the way that they pace things in this story.

This movie has a car chase sequence that has become quite famous and we get to see a cop chasing a subway train from stop to stop from a car underneath the platform itself.

This is the kind of sequence that is so thrilling to watch no matter how often one has seen it.

The find a way to add in some nice twists and turns to this story which help make it more interesting to watch unfold.

It’s an extremely well made movie yet even after 49 years, I still question the fact that it was named Best Picture at the Oscars.

The story is suspenseful but is it really Best Picture material? Is the story powerful enough?

I think it got an advatge in the voting due to the fact that each of the other four nominees had more reasons not to vote for them, so this film became to lesser of 5 evils.

Bottom Line – Hackman is great in this film and helps elevate the story even higher by his powerful performance. He was quite deserving of his Oscar win for Best Actor for his work in this film. The story stays thrilling throughout and that has much to do with the way that they pace things really well. The character of Popeye Doyle has become quite iconic very since this film came out and he has been used as the base line for how a cop should work; by using his wits and his guts the entire way through. The most famous scene of this film that has  Hackman chasing a subway train from platform to platform is quite amazing to watch because it is breathtaking no matter how often one has seen it. The story has some nice twists and turns along the way that adds to the suspense of it all. This is a really well made film, but I still question the fact that it was able to win Best Picture at the Oscars that year.  The story IMHO is done really well, but it isn’t powerful enough to be considered the best film of the year. The problem is that the other 4 nominees also couldn’t be considered the best of the year, so I guess they decided to go with this one in order to keep the accolade away from the other nominees. Recommended!

MovieRob’s Favorite Trivia –  The car chase was filmed without obtaining the proper permits from the city. Members of the NYPD’s tactical force helped control traffic. But most of the control was achieved by the assistant directors with the help of off-duty NYPD officers, many of whom had been involved in the actual case. The assistant directors, under the supervision of Terence A. Donnelly, cleared traffic for approximately five blocks in each direction. Permission was given to literally control the traffic signals on those streets where they ran the chase car. Even so, in many instances, they illegally continued the chase into sections with no traffic control, where they actually had to evade real traffic and pedestrians. Many of the (near) collisions in the movie were therefore real and not planned (with the exception of the near-miss of the lady with the baby carriage, which was carefully rehearsed). A flashing police light was placed on top of the car to warn bystanders. A camera was mounted on the car’s bumper for the shots from the car’s point-of-view. Hackman did some of the driving but the extremely dangerous stunts were performed by Bill Hickman, with Friedkin filming from the backseat. Friedkin operated the camera himself because the other camera operators were married with children and he was not. (From IMDB)

Genre Grandeur Worthy? – Comes close. The story is thrilling and manages to keep the suspense level quite high, but something is missing that would make it more powerful and compelling a story.

One thought on “Genre Guesstimation – The French Connection (1971) – Encore Review”