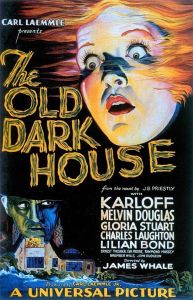 “The fact is, Morgan is an uncivilized brute. Sometimes he drinks heavily. A night like this will set him going and once he’s drunk he’s rather dangerous. ” – Horace Femm

Brief Synopsis – A group of strangers come upon a seemingly deserted house but it is inhabited by some very strange characters.

My Take on it – This is a film that I came across by accident and was quite intrigued to see since I am familiar with James Whale’s masterpiece Frankenstein (1931).

Unfortunately, this movie doesn’t wok nearly as well and as a horror film, it fails to be as effective as one would hope.

The various storylines of the characters aren’t developed enough and the story jumps back and forth between the different arcs presented here.

The cats of this film is quite impressive given the fact that they are almost all actors who were very very talented.

Unfortunately, this film doesn’t give any of them enough to do.

Whale definitely was a very talented writer and director, but this isn’t a movie that one should expect to see his genius come through because the story is lacking in so many aspects that would have helped make things thrilling.

The short run time actually hurts this film because they don’t have enough time to thoroughly explore many of the characters or story lines and in some instances, it all seems far too rushed.

Bottom Line – Pretty strange film that fails to be as effective as one would think a horror film should be. The cast is amazing with Karloff, Douglas,Stuart, Laughton and Bond doing what they can with what they are given. Whale was a great writer and director, but this film is quite lacking in numerous aspects that would have helped it become thrilling. The short run time of this film actually hurts things because they don’t seem to have enough time to really explore these characters and circumstances along the way.

MovieRob’s Favorite Trivia – In a 1988 interview, Gloria Stuart recalled that Boris Karloff ran back and forth across the stage to achieve the desired effect of being out of breath. She asked him, “Can’t you just FAKE it?” and he said that wasn’t the way he worked. (From IMDB)