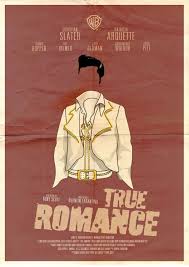 “Sicilians are great liars. The best in the world. I’m Sicilian. My father was the world heavy-weight champion of Sicilian liars. From growing up with him I learned the pantomime. There are seventeen different things a guy can do when he lies to give himself away. A guys got seventeen pantomimes. A woman’s got twenty, but a guy’s got seventeen… but, if you know them, like you know your own face, they beat lie detectors all to hell. Now, what we got here is a little game of show and tell. You don’t wanna show me nothin’, but you’re tellin me everything. I know you know where they are, so tell me before I do some damage you won’t walk away from. ” – Vincenzo Coccotti

Brief Synopsis – A young couple accidentally steal a suitcase filled with drugs and travel across the country to try and evade the mobsters who are after them.

My Take on it – I’m going to be a guest at the end of the month on a podcast that will be reviewing the body of work of Director Tony Scott, so I plan to watch and review over the next 8 days, 8 of his most popular films in order of their release dates.

This is actually one of my favorite Tony Scott films because it is so much fun to watch these characters as often as possible.

The story is written really well by Quentin Tarantino and due to him being able to sell this script, he was able to start his own directorial career.

The characters are developed really well here and the story really allows for them to evolve in ways even they couldn’t imagine.

The cast is superb and even the small roles are filled with some very recognizable and talented actors.

Tony Scott does an amazing job keeping this story so much fun and it constantly feels as if we are on a roller coaster ride because of the fast paced nature of it all.

Christian Slater and Patricia Arquette are perfectly cast in these roles and they make us care so much about their character that we ca n easily love them despite some of the things they end up doing here.

The dialogue flows so well from these character’s mouths and things come across quite realistic and genuine.

The story itself is one that has been done numerous times before, yet the twists that QT adds to things helps make it constantly feel fresh and innovative as things move along.

This is such a fun film to watch and rewatch over and over.

Bottom Line – Excellent story that works so well because the characters are developed so well over the course of the film. The cast is superb and even the small roles feature very known and talented actors. Scott does a great job directing this film and lets us join in on the ride that is truly a non stop roller coaster journey from start to finish. Slater and Arquette has amazing chemistry together and despite some of the things they do here, it’s so easy to fall in love with them.  This film was written by Quentin Tarantino and he was able to start making his own movies after selling the script to this one.  The dialogue is very Tarantino-esqe and works so well because the words literally flow right out of these character’s mouths in such a genuine and believable way. The story is a twist on a very familiar kind of story yet it always feels fresh and innovative the whole way through due to the way that it is presented. Such a fun film!!! Highly Highly Recommended!

MovieRob’s Favorite Trivia –  The genesis of the film began with a fifty page script by Roger Avary titled “The Open Road”. Avary described the plot as being about “an odd couple relationship between an uptight business man and an out-of-control hitchhiker who travel into a Hellish midwestern town together.” When he had trouble finishing it, he asked his friend and fellow Video Archives clerk, Quentin Tarantino, to give it a shot. After several weeks, Quentin handed him over five hundred hand-written pages of, what Avary described as “the Bible of pop culture”. Roger typed and edited the behemoth, working with Quentin on further story ideas. According to a Film Threat article from 1994, the final script was a combination of this movie and Natural Born Killers (1994). Reportedly, it followed Quentin’s original Natural Born Killers script until after the prison riot. After escaping, Mickey and Mallory decide to find and kill the screenwriter who wrote the glitzy Hollywood movie about their exploits. The writer goes on the run, and True Romance was the movie he writes while trying to evade the two psychotic killers. It was told in trademark Tarantino chapter fashion, out of chronological order. When it became obvious that the miniseries-length script would never sell, they split the two stories into separate movies. (From IMDB)