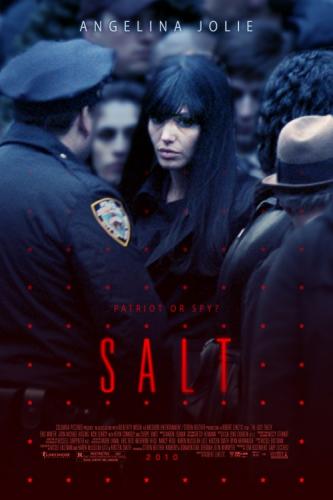 “[setting off security wand] Shrapnel. A Serbian landmine. They’ve spent more time looking at it than the doctor did.” – Shnaider

Brief Synopsis – A CIA agent is accused of being a double agent and must do all she can to stop an assassination attempt while trying to prove her innocence.

My Take on it – This is a film that I recall seeing not long after it came out and didn’t recall much about what happened so I figured it was a great time to check it out again.

The story is quite thrilling and works so well because of the way that they utilize lots of twists and turns along the way.

The film leaves very little unexplained at the start and it’s quite enjoyable to see how things play out especially given the fact that both the viewer and the characters constantly learn more and more about what is truly happening at the same time.

Some of the plot threads are very intriguing and help keep things extremely thrilling along the way.

Angelina Jolie is great in the lead and once again shows how great an actress she can be in action thrillers like this one.

The story constantly raises the suspense level more and more as the story moves along and that helps keep things so entertaining.

In addition to Jolie, the supporting cast is also great and both Liev Schreiber and Chiwetel Ejoifor stand out in very intense roles.

The way that the story unfolds, they allow for the possibility for turning this into a franchise but that never really materialized which is a same because they have lots of potential here.

Bottom Line – Great thriller that works really well because of some of the twists and turns in the story. The fact that very little is explained at the beginning and the viewer along with the characters learn new and thrilling information as things unfold. Jolie is great in the lead and once again shows how fun an action actress she can be. The story keeps raising the suspense level as things move along and that helps keep things so enjoyable. The supporting cast is also great and Schrieber and Ejoifor stand out among the rest of them. The story leaves things open to a sequel yet that never happened which is a shame because this might have been a very good franchise. Recommended!

MovieRob’s Favorite Trivia – The true design of the Presidential Emergency Operations Center (PEOC), where the last part of the movie is set, is highly classified. So production designer Scott Chambliss based his designs on the old German government bunker in Ahrweiler, near Bonn. (From IMDB)