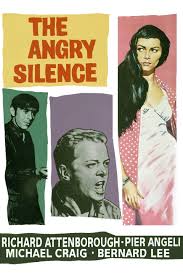 “Shut up! Shut up will you! You don’t have to worry about not talking to me. I don’t want you to talk to me, do you hear? But you stay away from my family. Just stay away from us!” – Tom Curtis

Brief Synopsis – During a strike at a mine, one man chooses to continue the work despite the fact that his actions will affect his life and his family.

My Take on it – This is a film that I knew nothing about before coming across it during my quest to watch more films starring Richard Attenborough.

The plot itself is quite intriguing and they find a way to keep things somewhat timeless especially when dealing with the way workers and managers deal with impending strikes even if things aren’t presented in a more enjoyable way.

Not much has changed over the past 60 years and things are pretty much the same now as they were then which is quite a shame.

They are able to show here how the needs of the many definitely outweigh the needs of the few and a strike that may be helpful to the entire group could cause problems for the individual along the way.

Attenborough does a nice job with this role, but something constantly feels missing that would help make things even more powerful to watch unfold.

The pacing is quite slow and that also isn’t very helpful to keeping this more engaging.

The 90 minute run time is perfect for this film, yet since the characters aren’t developed on a deeper level, it’s harder to really sympathize with everything that occurs here.

Bottom Line – Intriguing look at the way that strikes work and how things might be better for the group as a whole, but not necessarily for the individual. Attenborough is great in the lead role yet the story fails to be as powerful as it could be with him in that role. The story moves along at a pretty slow pace which hurts things a bit. The short run time helps move things along, but there is still not enough given here for us to feel even more sympathy for the characters as things move along.

MovieRob’s Favorite Trivia – This movie was initially banned in Wales where the cinema chains were controlled by the miners’ unions. It was only when Sir Richard Attenborough personally intervened and screened it for the union leaders that the ban was revoked. (From IMDB)