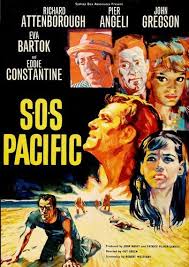 “Let’s have the plot of that hurricane. They really cover themselves always. When in doubt, draw a large circle. Something funny about getting a warning such as this. Wasn’t anyone taking about hurricanes this morning.” – Jack Bennett

Brief Synopsis – A group of passengers on their way back to civilization by plane get stranded on a deserted island where things are more dangerous than they had suspected.

My Take on it – This is a film that I came across why trying to watch more movies featuring Richard Attenborough in order to expand my knowledge of his films.

The story actually starts off quite well and they do a nice job of introducing these very different and diverse characters.

Unfortunately, the story gets a bit too messy along the way and things aren’t as enjoyable as one would hope.

The film sports a pretty good cast and Attenborough shines here because he plays a really slimy kind of character who will weasel his way in and out of situations.

Once the group gets shipwrecked, they seem like they are a tailor made version of the cast of Gilligan’s Island including  2 beautiful women, a physicist, and an elderly women.

The film must have had a very small budget because the effects used look extremely fake the whole way through.

The most unbelievable effects used here are the ones in the shark attack scene.

Bottom Line – Film that starts off well by introducing us to the various characters but then gets too messy as things move along. The cast is great and Attenborough is fun as a weasel. Once they get shipwrecked, the characters and predicaments feel too much like an episode of Gilligan’s Island.  Some of the things that happen here are a bit too far fetched and that takes away from the story too much.  The effects used in some of the scenes look far too fake and the hardest part to really believe is the shark attack scene.

MovieRob’s Favorite Trivia – According to Jane Allen in her book “Pier Angeli: a fragile life”, Director Guy Green had a hiatus between completion of Desert Patrol (1958) and the filming of The Angry Silence (1960), and picked up the script for what he considered a “potboiler”. It also gave him the chance to work with Sir Richard Attenborough again before their next movie. The producers instructed him to find a Pacific-style desert island with palm trees fast, and he went with the designer to London Airport. Unable to get tickets for Majorca, on a whim they flew to Las Palmas in the Canary Islands, and found the ideal location at the southern tip of the island: just a beach with a few trees. (From IMDB)