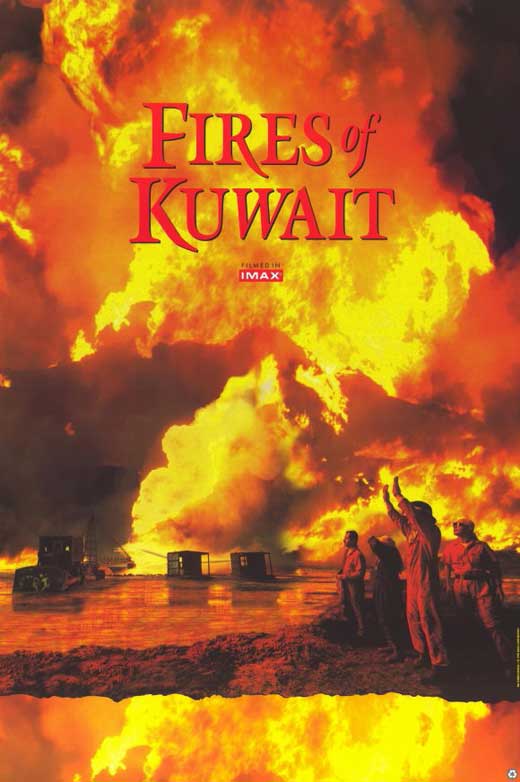 “The pain of the past is truly wasted, if we learn nothing from it.” – Narrator

Brief Synopsis – Documentary about the oil fires set in Kuwait following the invasion by Iraq in 1992 and how firefighters of the world banded together to try and stop these oil fires.

My Take on it – This is a film that I came across by accident and was quite impressed with the visuals.

The film is intended to be seen on an IMAX screen and is probably spectacular in that kind of venue.

The way that they show the raging fires from various angles is quite breathtaking even when not watching it on a 40 foot (or larger) screen.

The way that they show the progress and work of these dedicated foreign fire fighters who came from al over the world in order to help stop these catastrophic oil fires that were set y the retreating Iraqi forces in order to cause as much damage to the country and its economy as they could.

The film does get a bit too technical every so often when they try to explain the various techniques used by the different teams in order to find ways to stop these fires.

Despite this, things still work as they explain the ways that these firefighters attempt to put out these fires.

The fact that these brave men and women were willing to take on such a task despite knowing that it would take years to quell these fires says so much about their dedication to their craft and to the world.

Bottom Line – This is a visually powerful film that probably is spectacular to watch on an IMAX screen. The film shows the progress of the firefighting teams from all over the world that converged on Kuwait in order to help stop the raging oil fires set by the Iraqis on their way out of the country. The film gets a bit too technical in the ways that they describe the various methods to fight these kind of fires, but it still works despite this. Recommended!

MovieRob’s Favorite Trivia – The first IMAX film to be nominated for an Oscar (Best Documentary). (From IMDB)