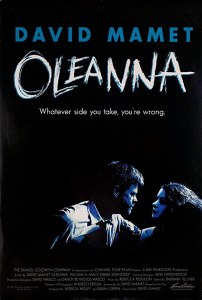 “You don’t have to take notes, you can just listen.” – John

Brief Synopsis – Following meetings between a student and a teacher, she accuses him of assaulting her.

My Take on it – This is a film that I came across by accident and was intrigued to see what it was about because it was written by David Mamet.

Mamet is a great screenwriter and playwrite and really knows how to create superb dialogue for his characters.

This film is no exception to that and the conversations and debates between the characters can be quite engaging even if parts of it are much harder to believe could theoretically happen.

The casting of William H Macy and Debra Eisenstadt works here and both are able to handle the dialogue and actions of their characters really well.

Some of the debates between the characters get quite powerful, but them tapers off for a moment or two along the way before rearing up once again.

Unfortunately, this story feels a bit too long and drawn out which hurts things immensely because it could have been wrapped up quite easily with a shorter run time.

This is based on one of Mamet’s plays and probably works more effectively on stage than it can on screen largely due to the minimalist script and story that need sto be seen close up from a more intimate position.

Bottom Line – Mamet is such a great writer of dialogue and this film is another example of that. The performances by Macy and Eisenstadt are powerful to watch. The story unfortunately is drawn out too much along the way which hurts things a bit. The verbal debates between the characters are great even if certain aspects of it don’t feel realistic enough. This was originally written as a play and I think that it would be much more effective on a stage than it actually is on screen.

MovieRob’s Favorite Trivia – The Broadway production of “Oleanna” by David Mamet and starring Bill Pullman and Julia Stiles opened at the John Golden Theater on 11th October 2009 and ran for sixty five performances until it closed on 6th December 2009. (From IMDB)