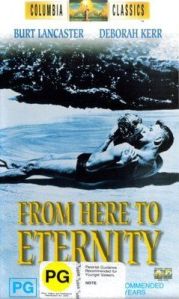 “Nobody ever lies about being lonely.” – Robert E. Lee “Prew’ Prewitt

Brief Synopsis – On the eve of the attack on Pearl Harbor, a soldier is punished for not agreeing to be a boxer for the regiment while his commanding officer’s wife starts a love affair with his second in command.

Bottom Line – Great story that works quite well. The various story lines help keep things even more interesting because we get to see the diversity of all of these characters situated in the same place. The cats is superb with Burt Lancaster, Debora Kerr, Frank Sinatra, Ernest Borgnine, Montgomery Clift and Donna Reed all giving very realistic portrayals of their characters. The film’s various story lines encompass numerous genres which helps make things stand out especially when jumping from one story thread to another. The film deservingly won 8 of 13 Oscars including Best Picture, Best Director, Best Support Actor (Sinatra) and Actress (Reed). The biggest problem here is that some of the scenes just aren’t poignant enough and fail to move this up a level to make it somethings more powerful. The most iconic scene of the movie is obviously the beach scene which has been parodied and copied so often over the 67 years since this movie was made. Recommended!

MovieRob’s Favorite Trivia – In the book, Karen Holmes reveals that the reason why she can’t have children was because her adulterous husband infected her with gonorrhea which led to her having to have a hysterectomy. Naturally, this was far too racy for 1953 film censors, so had to be toned down. (From IMDB)