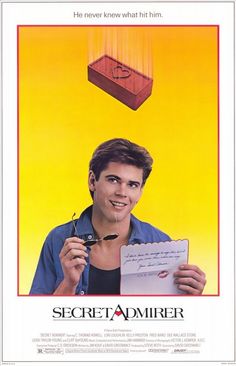 This month’s genre has been chosen by Todd of The Forgotten Filmz Podcast and we will be reviewing our favorite 80’s Teen Films.

Let’s see if I felt that this movie would be worthy of being in the company of my others favorite movies in the genre of 80’s Teen Films…..

“[wearing a teddy, posing in the mirror] What should I wear?” – Deborah Anne Fimple

Brief Synopsis – A shy high school kid sends a secret love letter to the girl of his dreams, but the letter gets into the wrong hands which begins a chain of a comedy of errors.

My Take on it – This is a film that I recall seeing in theater when it came out (I was 11) and it always has had a personal connection to me because it actually gave me an idea of how to profess my ‘secret’ love to a girl in my school when I was 13.

I wrote a love letter similar to the one in the film and slipped it into her locker.

Obviously, my experience didn’t go as well as the one in the film, but it has been etched into my brain in the 33 years ever since.

This is far from an amazing movie, yet it gets so much right that helps keep it interesting.

The film is able to stay fun from start to finish and it also is able to stay as believable and realistic as possible due to the way that these characters and their stories are depicted.

The story starts off quite well and then they do a wonderful job allowing things to spiral out of control so that the characters themselves don’t even understand how things happened.

The misunderstanding between these characters is so enjoyable to watch because it is able to give off the feeling that this is a very true comedy of errors that could conceivably happen.

The things taht I really enjoy about this film is that it has a lot of heart and it’s underlying message about the lengths one will go to for true love shine through from start to finish.

Bottom Line – Really fun film that works quite well. The characters come across as feeling genuine and realistic and we can really believe all that happens to them. The way that the story spirals out of control due to lots and lots of misunderstandings is great because it really gives off a vibe of things being a true comedy of errors. The cats is superb with Howell, Loughlin, Preston, Wallace, De Young, Taylor-Young, Ward and Siemaszko all giving such entertaining performances. The film has a message about true kinds of love ad that rings true throughout. Recommended!

MovieRob’s Favorite Trivia – This film was part of an intense, front-page-of-newspapers controversy in Puerto Rico in early March of 2016 when it was revealed that ‘writer’ / director Eduardo Ortíz had basically plagiarized it almost in its entirety – word-for-word, scene-for-scene, and shot-for-shot – when he did his film Vasos De Papel (2016), and had tried to make everybody believe that the screenplay had been created and written by himself. The film had only been playing at Puerto Rican cinemas for a few days when the first articles pointing out the similarities between the two films, and pointing out that there was no mention anywhere of it being based on ‘Secret Admirer’, arose. Once the film was no longer being shown in cinemas across Puerto Rico, Mr. Ortíz first issued a statement saying that there were “certain similarities between one film and the other, not plagiarism. Everything is a matter of interpretation”. Only a few hours after making that statement, Mr. Ortíz changed it, saying in a radio interview that he “had done something terribly wrong”, and apologizing to his cast and crew. Mr. Ortíz had ignored and/or refused to comment on the issue until actress Natalia Lugo, who played the lead on Vasos De Papel (2016), released a statement on social media where she both condemned the film and expressed the embarrassment she felt when she saw ‘Secret Admirer’, and came to understand how she and her fellow actors and crew had been duped. (From IMDB)

Genre Grandeur Worthy? – Not really. It’s a fun movie, but it’s far from being great.