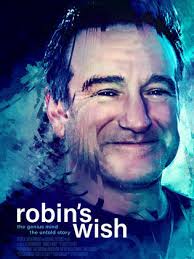 “I think it’s important that the truth comes out because there are so many affirmative things that Robin stood for and we want to believe in all of them. We want to believe in him. And there’s a danger that his suicide could occasion people to think, ‘Oh, he wasn’t what we thought he was. We didn’t know him after all.’ Um, but we did. ” – David E. Kelley

Brief Synopsis – Documentary that tries to explain what happened to Robin Williams which caused his brain to begin to deteriorate besides taking his own lie.

Bottom Line – Fascinating film that sheds so much light on the way that Robin Williams’ brain both made his a star and caused his death They do a nice job here of explaining things in a layman’s way so that it’s easier to understand what is really going on.  His erratic personality over the years helped make him a true star because he was able to add improvisation to anything he took part in which was always so entertaining to watch.  The interviews with close friends and relatives is so engrossing to watch because they help us get an even clearer understanding of who he was as a person instead of just as a comedian we all know and loved. Recommended!

MovieRob’s Favorite Trivia – Robin Williams’ widow, Susan Schneider Williams, chose the film’s title, and approached director Tylor Norwood to make the film. Initially resistant, Norwood said he wanted to help people “understand the pain [Williams] felt as his talents and faculties rapidly slipped away” and he hopes the film “rights a wrong that was done to him, and takes away a cloud that has unjustly hung over his legacy for far too long.” (From Wikipedia)