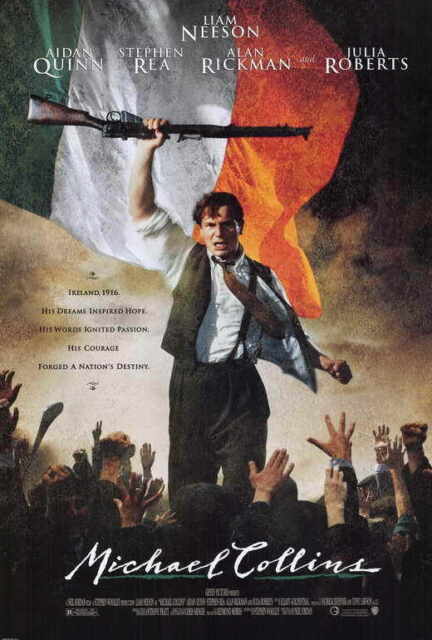 “Give *us* the future, we’ve had enough of your past. Give us back our country, to live in , to grow in, to love.” – Michael Collins

Brief Synopsis – Biopic of the life of one of the leaders of the Irish fight to stop British rule in their country.

Bottom Line – Great story that works really well. Liam Neeson does a wonderful job in the title role and makes us care so much about his character and his cause at the same time. The story is paced really well and they are able to find a way to keep things compelling and fascinating the whole way through. The love story aspect between Neeson and Julia Roberts is a bit weak and probably wasn’t even necessary to be included here.  Alan Rickman and Aidan Quinn are also both great in their respective roles here. Recommended!

MovieRob’s Favorite Trivia – Despite containing several brutal scenes of violence, the film was given a very lenient ‘PG’ rating in Ireland mainly because of its historical context. Sheamus Smith, the censor, issued a press statement defending his decision, claiming the film was a landmark in Irish cinema and that he believed “because of the subject matter, parents should have the option of making their own decision as to whether their children should see the film or not.” The quad poster used to advertise the film in Ireland carried a warning message that read, “WARNING TO PARENTS AND GUARDIANS: This film includes scenes depicting explicit cruelty and violence along with crude language. It is advised that children under 12 years be accompanied by a parent or adult guardian.” The film subsequently became the second most successful movie ever released in Ireland. (From IMDB)