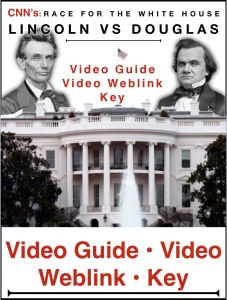 “You’ve done good for a hick woodsman from the frontier. But you know something lies rotten at the heart of your country. And You’re the one to save it. But how does a clean shaven prairie lawyer stay as Honest Abe when you know you’ll have to play dirty and devious to become President? And what if you reach the White House and there’s no nation left to save?” – Narrator

Brief Synopsis – A look at the way a young lawyer with a gift for speech was able to overcome the odds against him and become one of the greatest US Presidents in history.

Abraham Lincoln has been known to be one of the greatest and most influential Presidents of the US.

This documentary shows how he was able to go from being a small town lawyer to serve as the leader of a country on the verge of collapse due to the issue of slavery.

This film does a great job showing how his personal and political rivalry with Stephen Douglas helped propel him to the Presidency.

Each of them was a great orator and that was essential for them to both clinch their respective Party’s nominations in this pivotal election.

This film doesn’t shy away at all from showing how even one of the most honest of men needed to use power and influence in order to obtain the Presidency.

He had his supporters do some very dirty tricks in order to reach the ultimate goal of the White House.

The way that they show the politicking of Lincoln and his supporters shows how essential it is to promise favors to opponents in order to find a way to unite a party even in such a difficult time.

History has shown us how integral this election was for the future of the country and it is truly amazing to watch how all of this unfolded.

Bottom Line – Very in depth look at the way that the political system worked especially when the country was on the verge of collapse due to the issue of slavery. They do a wonderful job showing the personal and political rivalry between these two great orators and explain how each was able to ascend to the top of their Party’s nominees and clinch the nomination. They don’t at all shy away from showing that even the most honest of men was required to have his minions do some dirty work in order for him to reach the ultimate goal of winning the White House. The politicking has never been more useful in gaining favors among enemies in order to find a way to unite a party. History has shown how important this election was for the country and for the future and it’s quite amazing watching how it all unfolded. Highly Recommended!

MovieRob’s Favorite Trivia – The election was the first of six consecutive victories for the Republican Party. (From Wikipedia)