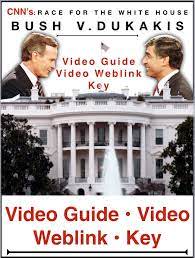 “We thought that he was in a good place to be running, having served as governor for quite a few years. What he had done in Massachusetts was something that would resonate across the country.” – John Dukakis

Brief Synopsis – Intense look at the election for President in 1988 between Vice President George Bush and Governor Michael Dukakis.

This is the first of the elections covered in this series that occurred during my own lifetime and I do remember many of the tidbits and commercials dealt with here.

They do a great job of showing the run up for this election and are able to keep things intriguing throughout.

The best part of this particular episode is the fact that for the very first time, we get to actually hear from one of the candidates thmeslevs and not just from historirans and other people involved in the election.

Michael Dukakis was around 85 when this was filmed and he gives lots of insight into his candidacy and his eventual loss.

This film is able to show the various hurdles that these men faced during their respective primaries in order to clinch their party nomination.

In addition, we get to see the way that they fought one another via the media in their quest for the US’ top office which included one on one debates.

They try to show here how important integrity can be to the perception of a candidate and even with so much integrity and personality, that doesn’t mean that one will automatically be able to win an election of this magnitude.

This was one of the very first campaigns to deal with lots of negative ads against each of the candidates and it has ushered in the use of such ads in elections ever since, virtually changing the way social media has helped or hurt a candidate.

Bottom Line – Great look at this run up to the election. Love the way that for the first time in this series, we actually get to hear from one of the candidates themselves. The documentary shows the hurdles that both men face in their respective primaries and then the various problems that they had when they needed to meet face to face. This movie shows how the integrity of candidates can be quite important even if it will not necessary be the way to give someone an automatic win. This was the first campaign to really deal with negative ads and has basically paved the way for the way elections have been run ever since. Recommended!