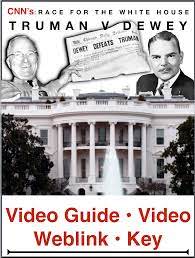 “He never aspired to be President of the United States. It was ‘I’ve got the responsibility, I’m going to work hard. I’m going to try and do the right thing and I trust the American people.’ It was just that simple.” – Claire McCaskill

Brief Synopsis – An in-depth look at the Presidential election between Harry Truman and Thomas Dewey in 1948.

This is an election that I knew a bit about and this documentary was able to definitely supplement my knowledge of events.

They do a wonderful job showing how this very important election played out.

The detail of this series is amazing and this election in particularly because they are able to show how these two men used very different kinds of tactics in order to try and win the Presidency.

We even get to see how thee methods actually were a large part of the decision making process to determine the final choice.

The nominations of both of these men were never foregone conclusions and they each had an uphill battle to clinch their party nominations.

The vote in this election seemed so close that we will always have the famous picture of Truman holding up the newspaper headline declaring Dewey the winner (incorrectly).

Bottom Line – Great look at the way that this election played out. They go into detail about how these two men used very different tactics in order to get votes and how those methods ended up deciding the Presidency. The nomination of both of these men were never seen as being straightforward and we get to see the hard battles that they both fought within their parties in order to get their names on the final Presidential ticket. The vote seemed to be so close that we now have the famous picture of Truman holding up the newspaper claiming (incorrectly) that Dewey had won the election.  Recommended!

MovieRob’s Favorite Trivia – Truman’s surprise victory was the fifth consecutive presidential win for the Democratic Party, the longest winning streak for either party since the 1880 election. (From Wikipedia)

Check out my *updated* mo