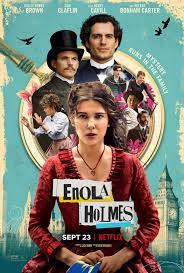 “Sometimes you must dangle your feet in the water in order to attract the sharks.” – Sherlock Holmes

Brief Synopsis – The young sister of Sherlock Holmes goes off on a quest to uncover the mystery of why their mother disappeared.

My Take on it – This is a film that I had heard some really nice things about and being a fan of mysteries, especially featuring Sherlock Holmes, I decided t check out what a story featuring his fictitious younger sister might be like.

This movie has an intriguing idea yet it fails to work as well as one might hope and expect it to.

The plot isn’t captivating enough and the characters are all a bit two dimensional.

Enola isn’t as enjoyable a character as her older brother and that hurts things a bit especially given the fact that this story also features him in a smaller role.

The film’s mystery moves at a nice pace but it unfortunately isn’t effective enough to keep things really enjoyable for the entire run time.

The film has a nice cast, yet none of them stand out here at all.

The plot constantly feels as if they are trying to match the kind of mysteries that Arthur Conan Doyle was able to churn out, but if one really wants to try and make a comparison between the two there really is no competition here.

Bottom Line – Intriguing idea that doesn’t work as well as one might hope. The character of Enola just isn’t as fascinating as her more famous older brother. The mystery moves along at a nice pace yet isn’t effective enough to stay captivating. The cast is fine but none of them truly stand out here. The story tries a bit too hard to try and match some of Conan Doyle’s work and when making the comparison, there is really no competition between the two.

MovieRob’s Favorite Trivia – No reference to a younger sister was ever made in the original Doyle stories. Some readers have speculated that there could be another Holmes sibling, citing the fact that Sherlock never mentioned that he had a brother (Mycroft) until he showed up at Baker Street. (From IMDB)