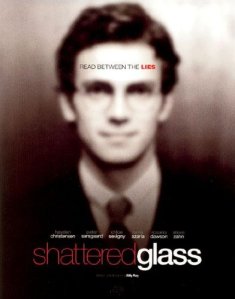 “[to Mrs. Duke’s students] It’s true, journalism is hard work. Everybody’s under pressure. Everybody grinds to get the issue out. Nobody’s getting any sleep, but you are allowed to smile every once in awhile” – Stephen Glass

Brief Synopsis – Based on the true story of a young influential reporter who would stop at nothing to get whatever story he could.

Bottom Line – Amazing film about the way that reporting works and the loopholes in the system. The fact that this is based on a true story says so much about the characters and the way things play out. The cast is superb and this film is further proof that Hayden Christiansen is a talented actor when given a palatable script along with great dialogue. The story plays out really well and they find ways to keep things so plausible as it all unfolds. Both Hank Azaria and Peter Sarsgaard are perfectly cast as editors of the magazine.  The film depicts investigative reporting really well from numerous angles which helps keep things moving at such an amazing pace. Highly Recommended!

MovieRob’s Favorite Trivia – Many members of the test audience didn’t believe the story was true. They thought no real-life magazine would have so many journalists in their early to mid 20s, even though the New Republic did. A place card added to the opening of the film stated that the median age of journalists working for the New Republic was 26. (From IMDB)