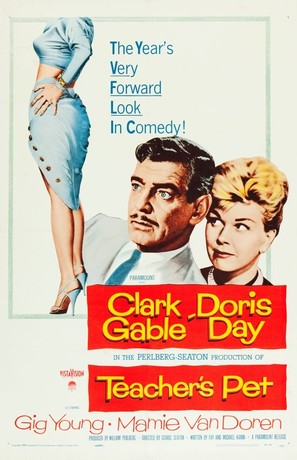 “As my father always said, ‘Education teaches a man how to spell experience.'” – Erica Stone

Brief Synopsis – A newspaper editor is sent to give a lecture to a group of journalism students at a local university, but falls in love with the teacher which forces him to conceal his real identity.

My Take on it – This is one of my all time favorite Doris Day films and it works so well.

The story itself is amazing and despite the large age difference between the two leads, it’s still quite believable and effective.

Clark Gable and Doris Day are both superb here and have so much chemistry on screen together.

The film’s dialogue is crisp and shape and is delivered in rapid succession which helps make it even more enjoyable to watch unfold.

They do a wonderful job showing both sides of the film’s debate and even after 62 years, the discussion still rages on as to whether is is more effective to learn in a classroom or on-the-job.

In addition to the two leads, the supporting cast is also great but Gig Young stands out here as a friend and confidant of both characters.

The film’s theme song, sung by Day herself is quite fun to listen to.

Check it out here.

The theme is quite timeless and still is very relevant today as it was back then.

The movie is filled with lots of innuendo and risque dialogue, yet they still manage to effectively capture the essence of the real tension that develops between these two characters.

Bottom Line – Amazing rom-com that works so well despite the age difference between the leads. Gable and Day have amazing chemistry together which helps keep things so enjoyable to watch, The dialogue is extremely witty and sharp and that helps make this story so entertaining. The film does a great job showing both sides of this story which makes us all wonder if either of the methods of learning to write are better than the other. Th supporting cast is also great and Young stands out as a friend and confidant to both characters.  The theme song sung by Day is lots of fun to listen to.  It’s amazing how this film still remains quite effective in today’s world where the question of whether education in the classroom or on the job is a more efficient way to learn. The film is filled with lots of innuendo that works so well in capturing the essence of the tension between these characters. Highly Recommended!

MovieRob’s Favorite Trivia – At the nightclub Gig Young’s character says that he has developed a mental discipline so that alcohol did not affect him, no matter how much he drank. In real life, Young was a hopeless alcoholic. During the fifties and early sixties he was at his height, thanks to his ability to play smooth, happy, but quirky fellows and it served him well. By the end of the sixties his drinking had ruined his career. His last shot was as the Waco Kid in Blazing Saddles (1974). His first scene had him hanging upside down from a jail bunk. Going cold turkey, he had a terrible case of the shakes, which director Mel Brooks thought was great acting, but then he coughed up some green bile and Brooks realized the situation. Within a day Gig Young was out and Gene Wilder was on a plane from New York. Young would never again have a shot at a key role in a major motion picture. (From IMDB)