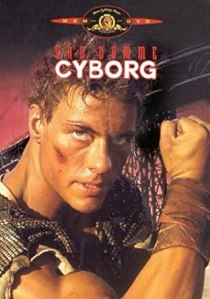 “First there was the collapse of civilization: anarchy, genocide, starvation. Then when it seemed things couldn’t get any worse, we got the plague. The Living Death, quickly closing its fist over the entire planet. Then we heard the rumors: that the last scientists were working on a cure that would end the plague and restore the world. Restore it? Why? I like the death! I like the misery! I like this world!” – Fender Tremolo

Brief Synopsis – In an apocalyptic future, a man tries to save a cyborg who may be the last hope for the world.

My Take on it – I have never been the biggest Jean Claude Van Damme fan, but the plot of this film was a big intriguing to me due to the similarities with the pandemic that we all are going through right now.

This is really a very silly movie that fails on so many levels.

Van Damme is definitely a fun martial artist to watch but they don’t make us care enough about his character or anything that happens to him along the way.

The way that this film switches back and forth between events of the present and the past is a bit jarring because it is done in a very strange way that it makes the story even more confusing to watch unfold.

The villains in the film aren’t menacing enough and that makes much of what they do seem more like a farce than something meaningful.

The one thing that they get right here are the fight scenes which are choreographed really well and come across more realistic despite the fact that the story itself doesn’t work very well.

Bottom Line – Terribly silly film that doesn’t work well enough. Van Damme is a great martial artist, but his character isn’t sympathetic enough here. The film switches back and forth between the present and glimpses of the path in a very strange manner that helps confuse the story even more. The villains aren’t menacing enough and that hurts thins because they seem more farcical than one would hope for in this kind of story line. The fight scenes are choreographed well and are convincing enough even if the story itself is lacking in so many ways.

MovieRob’s Favorite Trivia – Jean-Claude Van Damme re-edited the film, much as he did with Bloodsport (1988), to make the fight scenes more exciting and trim down the drama. Van Damme spent two months editing the film. He would do the same on Hard Target (1993). (From IMDB)