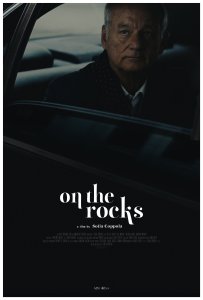 Brief Synopsis – When a woman suspects her successful husband is cheating on her, she enlists the help of her eccentric father in order to find out the truth.

My Take on it – Sofia Coppola is a great director, even if sometimes her films are beyond my scope of things.

This film, on the other hand, was such a delight to watch largely due to the superb dialogue that these characters are given which make them so realistic and fun to watch.

The cast is great and Rashida Jones shows that she can be a lead actress and hold a film together.

Bill Murray is perfectly cast in the role of Jones’ eccentric father and he plays it so well.

He clearly steals every scene that he appears in and makes us want even more of him because of his quirkiness and the way tat his character holds himself in both comedic and dramatic moments.

That is actually one of the best parts of this film, the fact that they are able to take such a serious subject and inject humorous characters and moments into things which help make it all so enjoyable to watch unwind.

The story itself is quite tangible to the audience and we can definitely empathize with the feelings of these characters as we see how things progress as the story moves along.

Bottom Line – Such a wonderfully written film that seems so realistic. The cast is superb and Jones and Murray are perfect together here. Murray especially stands out in his role and is a riot to watch in every scene he appears in. Coppola does a nice job directing this film and making it seem so plausible from start to finish. The mix of dramatic and comedic moments keeps things lighter which helps make this so enjoyable to watch unfold. Recommended!

MovieRob’s Favorite Trivia – When Sofia Coppola was workshopping the script for Lost In Translation (2003) with an acting class, Rashida Jones was among the students and played the part of Charlotte, which ended up going to Scarlett Johansson when the film went into production. (From IMDB)