This month’s genre has been chosen by Kristen of KN Winiarski Writes and we will be reviewing our favorite Classic Fantasy films (thru the 1970’s).

Please get me your submissions by the 25th of Nov by sending them to classickristen@movierob.net

Try to think out of the box! Great choice Kristen! 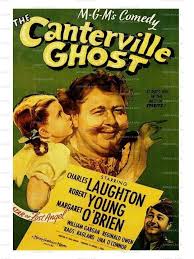 “I have roamed these halls for three centuries and I am so tired. If only I could rest…” – Sir Simon de Canterville

Brief Synopsis – A disgraced knight must remain trapped on Earth as a ghost until one of his descendants is able to commit an act of courage.

This movie was Kristen’s choice for me to watch.

This is a film that I knew nothing about until Kristen suggested that I watch it.

The premise is actually quite interesting but the choice to make this as a comedy hurts things since this kind of tale is more relevant in a more dramatic way.

Charles Laughton does a fine job in the title role and helps keep things enjoyable to watch unfold.

Robert Young is also fine in the role of Laughton descendant who must overcome his fears during battle in order to try and save his ancestor.

By far tho, the best casting decision of this film was with Margaret O’Brien who shows that age matters not because she plays her character with such wisdom that it makes her seem so much older in all that she does.

The film’s idea to mix medieval elements and modern elements into a story lie this works well and gives the viewer a chance to see how much things have changed over time yet still remained the same.

Bottom Line – Very intriguing idea that works less as a comedy than it would as something a bit more serious. Laughton is fun in this role, and helps keep things more enjoyable.  Young also does a nice job in the role of a modern soldier who must find a way to overcome his natural fears durig battle. The best casting decision tho was O’Brien who makes her young character seem so wise. The mixture of medieval characters with modern ones works well because it allows us to see how much things have changed, yet still stayed the same over the centuries.

MovieRob’s Favorite Trivia – After 38 days of shooting, director Jules Dassin replaced Norman Z. McLeod. Although a news item stated it was due to a “difference of opinion,” many believe it was done on the insistence of Charles Laughton. At the same time, William H. Daniels replaced Robert Planck as director of photography. (From IMDB)

Genre Grandeur Worthy? – Not quite. Fun film, but not powerful enough as it could have been.