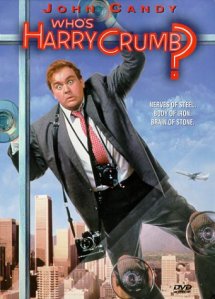 “My reputation precedes me. Otherwise I’d be late for all my appointments.” – Harry Crumb

Brief Synopsis – After an heiress is kidnapped, a bungling detective is hired with hopes that he won’t be able to solve the crime.

My Take on it – This was another attempt during the late 80’s to help establish John Candy in many different kinds of comedic roles; some worked, while others like this one failed miserably.

I have always been a fan of Candy, but this was a film that I never had any desire to check out.

They try far too hard here to make this film a pseudo – Fletch (1985) film and it doesn’t manage to be as effective or as enjoyable as that film was.

The plot is quite silly and pretty pathetic.

Things are far too convoluted here and they fail to find ways for things to make more sense along the way.

Candy is completely miscast in the title role and isn’t able to make the viewer care about him or anything he does because they are all completely over the top.

The film does have a great supporting cast, yet even with the likes of Jeffrey Jones and Annie Potts, they aren’t able to help make this more enjoyable to watch especially since this isn’t funny most of the time.

The film has various pitfalls that occur as things move forward and they are all a bit too predictable and expected which also hurts things a lot.

Bottom Line – Really silly and pathetic attempt to make a Fletch (1985) – like movie with Candy. The story itself is quite convoluted and doesn’t make much sense in the way that things are played out. Candy himself seems miscast in this kind of role and fails to make us care about his character or anything that he does along the way. The supporting cast is quite talented but none of them are able to make this movie any more enjoyably because it’s not funny at all. Many of the pitfalls that this character makes along the way are far too predictable and expected.

MovieRob’s Favorite Trivia – This is John Candy’s Fletch: playing a clumsy, endearing title character investigating (one a reporter, the other a private eye) a rich family’s problem, and using various disguises along the way. Even the soundtrack is similar. (From IMDB)