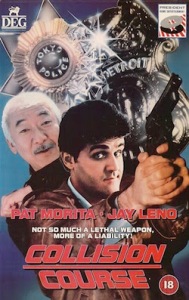 “You were supposed to negotiate with him, not kill him.” – Derek Jarryd

Brief Synopsis – A Japanese detective is sent to Detroit and ends up teaming up with a local detective in order to find a stolen automobile engine prototype.

My Take on it – This is a film that I have avoided for over thirty years because it just didn’t look interesting.

My suspicion was correct and I really should have continued to avoid it.

The mystery of the film is a bit too silly and fails on so many levels to keep the viewer’s interest.

I had hoped that since this film features both Jay Leno and Pat Morita that it might work a bit better.

Unfortunately tho, even with two talented actors the story doesn’t manage to work at all.

Leno and Morita are fun together especially during the parts where they are constantly trying to foil one another from advancing the mystery to a solution.

The plot itself is quite silly and contradicts itself far too often which makes it harder to take seriously.

The film’s dialogue is quite cheesy and in some instances cringe-worthy.

As much as I love Leno as an actor, there is truly a good reason that he became a talk show host instead.

Bottom Line – Terrible mystery that doesn’t work well at all despite having two very talented actors in the leads. Leno and Morita are fun together even if their characters take time to warm up to one another. The plot is pretty silly and it moves along at a strange pace throughout. The dialogue is far too cheesy and doesn’t work at all.  There’s a reason Leno ended up being a talk show host instead of a top level actor.

MovieRob’s Favorite Trivia – When Steve Martin appeared on The Tonight Show with Jay Leno (1992) in 2005, he played “Name That Clip.” Leno was supposed to differentiate clips from Martin’s two new movies, Shopgirl (2005) and Cheaper by the Dozen 2 (2005), with Martin taking $20 from Leno if he got one wrong. The last clip played was from this movie, which Leno immediately said was “a horrible movie.” Martin said Leno was right, but he would still lose $20 for making it. (From IMDB)