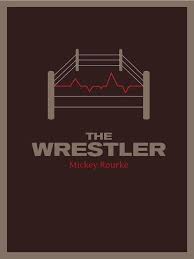 “I just want to tell you, I’m the one who was supposed to take care of everything. I’m the one who was supposed to make everything okay for everybody. It just didn’t work out like that. And I left. I left you. You never did anything wrong. I used to try to forget about you. I used to try to pretend that you didn’t exist, but I can’t. You’re my girl. You’re my little girl. And now, I’m an old broken down piece of meat… and I’m alone. And I deserve to be all alone. I just don’t want you to hate me.” – Randy ‘The Ram’ Robinson

Brief Synopsis – An aging former famous wrestler must deal with his advancing age and medical issues while trying to reconnect with his estranged daughter.

My Take on it – I have never been a fan of Darren Aronofsky’s films, but this one had me hooked from the very first scene.

This is such a great character study that tries to show the kind of life once famous people try to lead once the fame and fortune has faded.

Mickey Rourke is superb in the title role and shows how powerful and deep an actor he can be.

He totally loses himself in this role and creates such a three dimensional character who we can sympathize with.

His character’s addiction to the limelight is not something new, yet the perspective they give here feels so unique.

Love the story arc because it allows for the character to try and reflect on his life and his past and try to reassess it despite his difficulty in accepting his loss of fame and his venture into anonymity.

We get a clear understanding of both his inner and outer struggles as the story moves forward.

This is by no means a sympathetic character yet due to the way he is portrayed, we can find ways to care about his predicament and hope for him finding real redemption.

The idea of someone losing something so important to his self and being is presented really well here and we can see how difficult an adjustment it is for someone who has these feeling that remain strong and adamant to the core.

Rourke’s disturbing portrayal here was deserving nominated for an Oscar and it’s a real shame that he lost to Sean Penn.

The movie’s theme song by Bruce Springsteen is quite poignant and truly shows the message of this film.

Bottom Line – Such an amazing way to try and dissect the way that someone who is no longer famous must deal with anonymity after that fame fades. The characters internal and external struggles are very clear and they find a way to make this character so sympathetic despite the way that he scoffs at the rest of the world. The story seems like it should be one of redemption, but they ultimately try and show that it’s so much harder to shrug off what is deep down inside of a person no matter how much they try especially when they no longer feel alive when not being involved with the things that they love in life. Rourke is amazing in the title role and was quite deserving of his Oscar nomination for Best Actor, but it’s a shame that he lost to Penn because this was a much more powerful, if not disturbing portrayal. The theme song by Springsteen is quite poignant and works so well with the theme of this film. Highly Recommended!

MovieRob’s Favorite Trivia –  The first scene of Randy working the deli counter was improvised. When real customers kept walking up to the counter during filming, Darren Aronofsky told Mickey Rourke to take their orders while the camera would continue rolling. Also improvised were all of the backstage locker room scenes. (From IMDB)