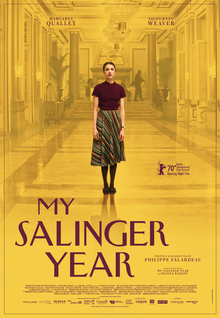 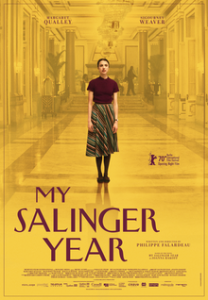 “The job of an agent is to open up opportunities for their clients, but, when it came to Salinger, the logic was reversed. We had to shield him from the outside world, bolstering his reputation as a complicated recluse.” – Joanna

Brief Synopsis – An aspiring writer takes a job working at a publishing house during the 80’s and is exposed to the reclusive author J.D. Salinger.

My Take on it – This is a film that I came across and was quite intrigued by the premise which sheds so much light on the world of literary agents.

The story actually works quite well largely due to the mysterious way that they portray JD Salinger throughout.

He isn’t a main character, but the story and the characters all revolve round him and his influence on the world and this firm in particular.

The film has a great cast which includes Colm Feore and Sigourney Weaver in supporting roles which allow the viewer to get a very intimate look at the world of publishing editors in the 80’s and how much they will do for their clients.

Margaret Qualley is fine in the lead role, but doesn’t manage to stand out enough.

They do a wonderful job leaving Salinger’s real personality very ambiguous since we are never quite sure as to what he will say or do at any given moment.

As a child of the 80’s, I loved seeing a character based on Judy Blume since that is able to add such a tangible element to the story since she was so popular in the literary world at the time.

Bottom Line – Intriguing story that works due to the various mysterious of Salinger. The cast is quite good here and allow us to get an idea of the inner workings of publishing houses and how diverse methods were used by different editors while advocating their clients. The films does a great job keeping the personality of Salinger quite ambiguous as we never quite know what he will say or do. Loved seeing Blume appear as a character in this film which helps make things even more tangible due to her growing popularity at that juncture in time. Recommended!

MovieRob’s Favorite Trivia – Opening Film of the 2020 Berlinale. (From IMDB)