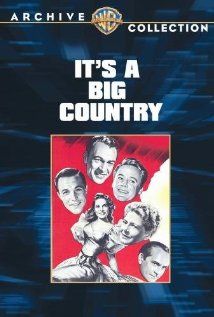 This is the second of three posts dedicated to The Sixth Annual Barrymore Blogathon being held over at In The Good Old Days of Hollywood. Tnx Crystal for letting me take part!

“Marry me? You don’t know anything about me.” – Rosa Szabo Xenophon

“You’re a girl. You’re pretty and you’re modest. What else is there to know?” – Icarus Xenophon

Brief Synopsis – An anthology of 8 short stories attesting to the powerful American spirit.

My Take on it – This is a film that I had never heard of before coming across it for this blogathon.

The premise is quite intriguing because of the way that they presnet things.

Each of the 8 segments in the film try to show different aspects of American life which relate to race, sex, religion, geographical locations, age and the way that the country is a true melting pot of so many varying cultures.

The film sports a splendid cast even if each character is only given a short amount of screen time.

The two biggest stand outs are Ethel Barrymore as an aging widow who is quite adamant that she be counted in the current census and Fredric March as an immigrant who will do all he can to help his young son be a success even if his ideal and methods are a big short sighted while looking at the ultimate goal of it all.

Each of these segment has a different director which adds so much to things because we get varying viewpoints on the makeup of the culture which is quite diverse within each of these 8 segments.

Bottom Line – Quite and interesting idea. Each of the segments in the film show different aspects of American culture and how they are perceived by other. The various stories deal with religion, race,. age, geography and even the way that the country is a melting pot of so many difference cultures. The cast is great even if none of them have much to do since the segments are all quite short. The two biggest stand outs here are Barrymore as an elderly widow adamant that she be counted in the census and March as an immigrant trying to give his son the best that he can even if he is sometimes short sighted in the ultimate goals.  Each segment is directed by a different director and that helps give this story such diversity between each of the vignettes. Recommended!

MovieRob’s Favorite Trivia – The scars on Van Johnson’s face in this film are real, not make-up. While filming A Guy Named Joe (1943), Johnson was in an automobile accident and thrown through the car’s windshield. The plastic surgery of the day could not totally remove his scars. In most of his later films, he wore heavy make-up to hide them, but probably felt that in this film, makeup on a reverend was not in his character’s nature, whereas in The Caine Mutiny (1954), he felt leaving the scars added to his character. (From IMDB)

One thought on “The 6th Annual Barrymore Blogathon – It’s A Big Country: An American Anthology (1951)”