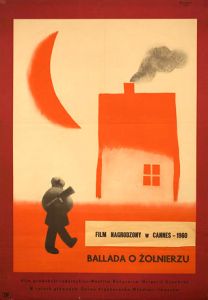 “Comrade General, instead of my decoration, could I go home to see my mother?” – Alyosha Skvortsov

Brief Synopsis – A young soldier tries to get home while on leave from the war in order to see his mother one last time.

My Take on it – This is a film that I would have never expected to see since I’m not the biggest fan of foreign cinema, let alone Russian films of the late 1959’s.

This movie was chosen by my good friend Howard of Rantings and Ravings for us to discuss as a companion piece to the film Planes, Trains and Automobiles (1987) on his Pop/Art podcast.

The story caught me by surprise and I was quite taken in by the way that this story gives us an innocent young character that we get to follow along with on his adventures in his quest to return home to his mother one last time.

The film is split up into various little episodes and he meets different kinds of characters along his journey.

Each of these encounters are quite unique and allow us to learn so much more about the characters and how he handles himself in these situations.

It also reflects Russian society at the time in lots of ways.

The pure heart of this character comes out during each of his various meetings and his character gets very developed along the way.

The choice to use a young and innocent character as the story’s focal points works quite well in allowing us to see the world through his innocent eyes especially when he is able to learn much about himself, his own life and Russian society as a whole.

The story plays out in some very unexpected ways and allows for us to garner so much insight into the world he lives in as well as his motivations and character.

Bottom Line – Intriguing film that shows the various obstacles that come in the way of this character as he yearn to see his home and mother one last time. The various segments that he encounters along the way are great to watch because they are so diverse and say so much about Russian society at the time. The young lead character is developed really well along his journey and we get a clear idea of his pure heart as his adventures continue. AS a focal point, this character is great to watch because we see how much his eyes are opened up about life and society and the story unfolds in directions even he could not have expected. Recommended!

MovieRob’s Favorite Trivia – On the first day of filming (the scene of departure from the front), Grigoriy Chukhray injured his leg; when the filming resumed, he contracted typhoid fever. (From IMDB)