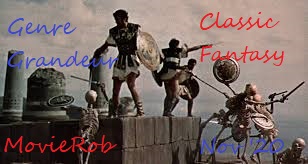 For this month’s next review for Genre Grandeur – Classic Fantasy films (thru the 1970’s) here’s a review of Willy Wonka and The Chocolate Factory (1971) by Darren of Movie Reviews 101.

Thanks again to Kristen of KN Winiarski Writes for choosing this month’s genre.

Next month’s genre has been chosen by Chris ‘Tank’ Tanski of Fright Rags and we will be reviewing our favorite Alternative Christmas movies.

Please get me your submissions by the 25th of Dec by sending them to alternativetank@movierob.net

Try to think out of the box! Great choice Tank!

Plot: A poor but hopeful boy seeks one of the five coveted golden tickets that will send him on a tour of Willy Wonka’s mysterious chocolate factory.

Tagline – Charlie is let loose in the chocolate factory and every kid’s dream comes true.

Story: Willy Wonka & the Chocolate Factory starts when a reclusive chocolate factory owner Willy Wonka (Wilder) creates a competition for five lucky winners to visit it factory, the world is taken by storm with the panic to be the lucky ones to get the tickets. Charlie Bucket (Ostrum) would love a chance to get the ticket, but his family being painfully poor can’t afford the luxury of buying endless amounts of chocolate and he sees Augustut Gloop, Veruca Salt, Violet Beauregarde and Mike Teevee get the tickets from around the world, until Charlie finds some money and buys two bars, finding the final ticket and taking his Grandpa Joe (Albertson) to Willy Wonka’s factory, an experience that will be filled with imagination.

Characters – Willy Wonka is a reclusive chocolate factory owner that shut the doors on his factory after rivals tried to steal his recipes. He decides to open his doors for a one off special tour for five lucky children, when he first appears you can tell he hasn’t been around people with the mix up of words, with his style being unique and his reluctance to help after the children disobey his rules. Charlie Bucket is from a poor family with his mother always working and his grandparents all sharing one bed, he doesn’t have any luxuries in life, he gets lucky with the last ticket and his humble approach will go against any of the other kids to win the tickets. The four other kids are all filled with a greedy side that has seen them win tickets without feeling like they deserve it.

Performances – Gene Wilder is amazing in the leading role of this film, his delivery of his lines adds to the distant character he has to create in this film. The child stars did work very well through the film, showing the bad natures of the four and the innocent natures of Charlie too.

Story – The story here follows a famous chocolate factory owner that opens his doors for the first time in decades for five lucky winners, who are promised a prize if they make it to the end. This is a story that shows us how children will need to be raised right it, if they are to learn any values in life, showing us four very demanding selfish children who are the complete opposite to Charlie, who has only ever known nothing. The journey through the factory is filled with magical musical numbers that show us just how important being honest truly is for people to succeed.

Fantasy – The fantasy side of the film comes from the different environments the characters find themselves in during the factory tour, each one does feel magical to be in.

Settings – The film does take us to the different locations from around the world for the winners, that shows the different backgrounds, while keeping the factory grounded in the normal town setting, while we enter the factory, we get amazing creations per different rooms.

Scene of the Movie – The first room.

That Moment That Annoyed Me – Nothing.

Final Thoughts – Willy Wonka & the Chocolate Factory is a truly amazing fantasy musical that will give everyone enjoyment.