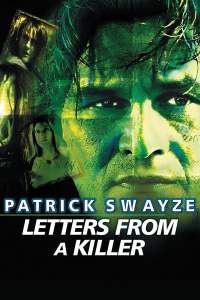 “Hearing your voice soothes me like waves softly lapping on the shore.” – Race

Brief Synopsis – A wrongly convicted man on death row corresponds with numerous women and begins to have more problems when he is framed again after he is released.

My Take on it – This is a film that I came across while looking through Patrick Swayze’s filmography and it sounded intriguing.

Unfortunately, this story is extremely boring and comes across as being much too predictable in everything that they do.

Swayze was a great actor, but one couldn’t tell that from just watching this film because it is atrocious all around and his character is far too superficial.

The film tries to present a mystery about a man on death row and it fails to work on any level because it falls flat the whole way through.

The supporting cast also doesn’t have much to do yet it was fun seeing Bruce McGill and Don Stark as bumbling detectives trying to solve the case while they keep contradicting themselves about what is really going on here.

The female supporting cast tries to also say something about the kind of women who would correspond with a convicted murderer and doesn’t manage to explain things at all.

The film also tries to add in a few action scenes, yet they are quite pathetic and unrealistic in the way that they present them.

Bottom Line – Really boring story that is far too predictable. Swayze was a great actor, but his role here is far too superficial. The mystery that they try and play out here just doesn’t work well and falls completely flat as things unfold in very expected ways.  Love seeing McGill and Stark here, but even their characters have little to do here especially when they keep contradicting themselves over and over.  The action scenes are quiet pathetic and unbelievable.

MovieRob’s Favorite Trivia – During filming on May 9, 1997, Patrick Swayze broke both legs and tore four tendons in his shoulder when his horse threw him into a tree. He said he grabbed the horse’s mane and flipped himself around so that he wouldn’t hit the tree with his head. (From IMDB)