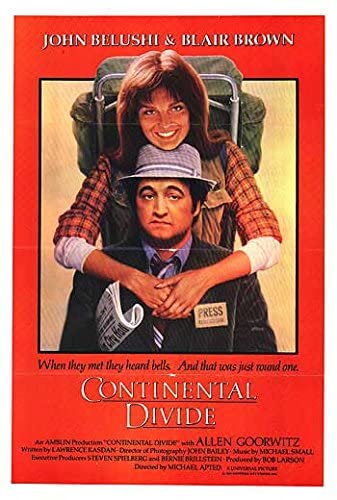 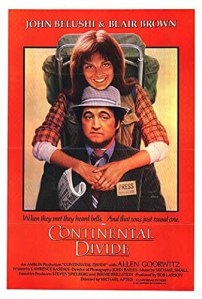 “I know what I wrote, I was there when I wrote it.” – Ernie Souchak

Brief Synopsis – A controversial Chicago reporter is sent to cover a story high up in the Rocky Mountains.

My Take on it – This is a film that I recall seeing on cable years ago yet didn’t remember anything about it besides the fact that it was a rom-com with John Belushi.

Belushi was known for his comedic roles during his tragically short film career and this is a film that helps show that he did have the potential to  break out in other kinds of roles and genres.

The story does a wonderful job with Belushi’s character and they are able to develop him in such a great way especially when he throws in a bunch of one-liners.

His character’s personality is shown in a realistic way that helps endear him to the viewer.

Unfortunately, his chemistry with Blair Brown is far from ;perfect and it’s a bit difficult to believe that these two characters can fall in love so easily.

Belushi’s best scene are with Allen Garfield and the scenes featuring the two of them are superb because they really work so beautifully together.

Belushi’s character is quite lovable and that helps make things so much more enjoyable to watch as things unfold.

Bottom Line – Fun rom-com that helps show that Belushi is more than just a comedian. His character is developed quite well and the choice of how to present his personality is great. His chemistry with Brown isn’t that great tho and that is the most unrealistic part of the story. Love the scenes between Belushi and Garfield which are so enjoyable to watch because they work so beautifully together.  The film is able to make Belushi’s character so lovable in all that he does and it helps make us care so much more about what happens along the way.

MovieRob’s Favorite Trivia – An early example of filmmakers putting “1138” in their films as an in-joke with George Lucas, referring to his first film THX-1138. The number can be seen on a taxi (with the camera lingering on the car a bit longer than necessary) as John Belushi leaves the train station in Chicago. (From IMDB)