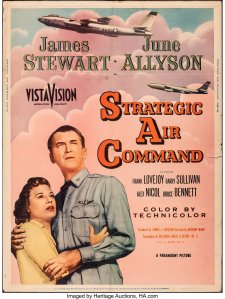 “Don’t tell me about your little problems General. I’m only interested in results!” – Sally Holland

Brief Synopsis – Following World War II, a former pilot turned baseball player is recruited to be a part of an elite team of pilots who deal with the daily threat of nuclear war with the Russians.

Bottom Line – Nice plot that doesn’t work well enough because as great an actor as Jimmy Stewart was, he as clearly too old for this role. The story is able to show the readiness that these men were training for in a realistic way. The story isn’t balanced very well between the home and military aspects of the story and they don’t nurture the relationship between Stewart and Jane Allyson as his wife.

MovieRob’s Favorite Trivia – Although there was a “Dutch Holland” in baseball, he never served in the military. The character of “Dutch” Holland is loosely based on the life of Baseball Hall of Famer Ted Williams whom left his career and became a Vought F4U Corsair flight instructor and then was recalled into active duty and flew combat missions in Korea. He was the wing man of legendary astronaut and future senator, John Glenn. Ted Williams resigned his Marine Corps Commission at the conclusion of the Korean War with the rank of Captain, the equivalent of an Army Captain. (From IMDB)