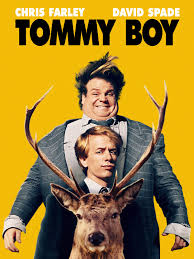 “Okay, and life preservers, these… we may need. Although what are the odds of us actually hitting a lake? My money says if anything, it’s gonna be a mountain.” – Richard Hayden

Brief Synopsis – Following his father’s sudden death, an underachiever is given a week to try and save his father’s company before it falls into the hands of others who wish to sell it.

My Take on it – This is a film that I have avoided for 25 years.

I never was the biggest fan of Chris Farley and this was one of his first films where he took the lead.

The overall premise is fine, but it doesn’t find a way to feel more original or unique n the way things play out here.

Farley and David Spade have great chemistry together and the fact that they worked on Saturday Night Live together for a few seasons probably helped that.

Watching the two of them together is reason enough to forget some of the pure stupidity of this film during a few key fun moments in the story.

The airplane scene is hilarious and stands out among the rest of the scenes in the film.

They do a wonderful job mixing together the verbal and physical humor which helps make this film and its plot a bit more palatable to digest.

One will have lots of trouble finding something quite unique here despite it having a few fun moments here and there.

The film is definitely a showcase for Farley’s comedy style even though it was never very diverse because it’s mostly the same kind of jokes being churned out again and again.

Bottom Line – Intriguing idea that doesn’t feel original enough. Spade and Farley have great chemistry together and help make things so much fun to watch despite the stupidity of it all. The scene on the airplane is hilarious and the film’s mix of verbal and physical humor helps make it more palatable. There isn’t much in a way of uniqueness in this film, but it still has its moments.  The comedy style of Farley was always very standard and that hurts things a bit because it fails to find a way to actually wow here.

MovieRob’s Favorite Trivia – When Bo Derek’s character comes out of the pool, Tommy says to Big Tom (Brian Dennehy), “Whoa, dad. She’s like a… ten!” Derek and Dennehy both appeared in 10 (1979). (From IMDB)