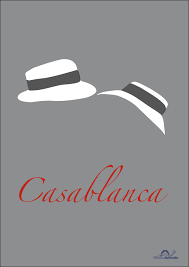 Initial Viewing Memories – This is a film that I saw for the first time for a writing class in 10th Grade where my teacher specifically gave me homework to watch this film and write an essay about it.  It instantly became a favorite of mine and I have enjoyed it on so many levels ever since.

“We musn’t underestimate “American blundering”. I was with them when they “blundered” into Berlin in 1918.” – Captain Renault

Brief Synopsis – An American saloon owner in the Moroccan town of Casablanca must change everything he stands for when a former lover from his past shows up as the Nazi’s begin to strengthen their hold on the city.

My Take on it – Such an amazingly written film that stays so enjoyable to watch the whole way through. The script is superbly written and they manage to develop so many of the characters along the way which adds so much suspense to things because we can easily begin to care about any or all of them. There is so much always going on in the background of every scene that tries to show the hustle and bustle life of the town on the eve of World War II.  All the characters must find a way to declare loyalty to one side or another despite the fact that some actually show their loyalty to both sides. Humphrey Bogart is superb in the lead role and this performance helped his career so much. Ingrid Bergman is also great as the leading lady and the chemistry between the two of them is off the charts here. The story is filled with lots of intrigue and dilemmas that these characters must find a way to deal with.  The music is superb here and the theme song – As Time Goes By has become so iconic over the years.  The supporting cats is also great and they have so many familiar faces playing these smaller roles. The story is paced really well and there are no lulls in the way things play out because of the various surprises along the way. The get the various aspects of the story melded together so well, so we get to see a tense thriller, a powerful romance and a psychological drama all rolled into one. Highly Highly Recommended!

MovieRob’s Favorite Trivia – In the famous scene where the “Marseillaise” is sung over the German song “Watch on the Rhine”, many of the extras had real tears in their eyes; a large number of them were actual refugees from Nazi persecution in Germany and elsewhere in Europe and were overcome by the emotions the scene brought out. (From IMDB)