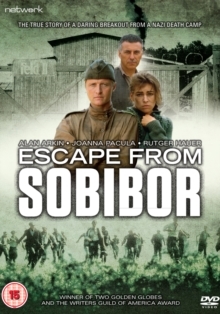 Initial Viewing Memories – I saw this when it first aired on TV when I was just 13. The story is so compelling and moving and remains so poignant and powerful no matter how many times that I’ve seen it because of its message of hope that rings true throughout.

“Observe: [scattering sand on the ground] Do you see? How I am scattering this? Grain by grain. That will be what will happen with your filthy Reich. It will vanish like flying dust and passing smoke.” – Old Man

Brief Synopsis – A group of prisoners in a Nazi death camp try to find a way to arrange an escape for all of the 600 prisoners.

My Take on it – Such a powerful film that is based on real events. The story unfolds in an unbelievable way and allows us to see that even in the most desperate situations, there is always room for hope. The characters are each developed really well and that adds to the suspense and tension because we never quite know who will eventually survive or not. They have some great twists in the story that help make things even more gripping to watch. The film doesn’t shy away from showing the evil of many of the Nazi and Ukrainian guards who would kill and maim just for their own amusement. This film is noted as one of the very first to allow full nudity in a prime time film due to the way that they needed to depict the realism of the gas chambers. The cast is spectacular and Alan Arkin, Rutger Hauer and Joanna Pacula are all amazing in their roles. It’s obvious that certain aspects of the story have been Hollywoodicized, but that doesn’t take much away from the impact of this very powerful story. Highly Highly Recommended!

MovieRob’s Favorite Trivia – Of the approximately three hundred prisoners who escaped to the woods from Sobibor, only around sixty survived until the end of the war. (From IMDB)