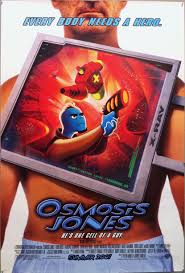 “Ebola? Let me tell you something about Ebola, baby. Ebola is a case of DANDRUFF compared to me! ” – Thrax

Brief Synopsis – A white blood cell and a medicine pill must try and keep the inner working of their human from being destroyed by a virus.

My Take on it – This is a film that I heard about when it came out, yet never had much of a desire to see what it was all about.

I probably should have stuck with my first instinct because this film was horrendous.

The premise itself is quite fun, but they never seem to find a good way to present things to us.

The animation is very much over the top and they depict the various body parts and organisms in very strange ways.

Their characters are a bit entertaining to watch even they they all seem a it too bland.

The choice to have Bill Murray play the human body that they all are a part of is an ok choice, but he isn’t given enough to do here besides puke, burp and just plain look sick the entire time.

The film’s concept is a bit too grandiose and the complexity of it all makes this story so much more confusing and fails to make much sense at all.

Bottom Line – Fun idea that is presented in a terrible way. The animation is a bit too over the top in the way that they depict various parts of the body. The voice cast is the only good thing about this film with Rock, Shatner, Hyde-Pierce and Fishburne keeping their characters a bit more entertaining than expected. Having Murray play the body that these organisms live in is ok, but he has very little to do besides puke, burp and just look sick the entire time. The concept of having the body seem like a well populated city, is just too complex and most of this story makes no sense what so ever.

MovieRob’s Favorite Trivia – Warner Bros. Feature Animation was in serious financial trouble during the film’s production, and in 2000 it came down to two options: green-light another film by Brad Bird, who made the critically acclaimed film The Iron Giant (1999), or this film. Warner executives chose this film over Bird’s, and upon learning this Bird got so mad that he took his film with him to Disney and Pixar. That film would become the highly successful The Incredibles (2004), whereas this film bombed at the box office, was critically panned, and almost ultimately killed Warner Bros. Feature Animation. (From IMDB)