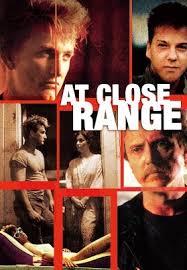 “Most people who drive through here see farms. Houses, and fields, and shit. I see money, I see things, everything got my name writ’ on it!” – Brad Whitwood Sr.

Brief Synopsis – A teenager tries al he can to both emulate and distance himself from his criminal father.

My Take on it – This is a film that I recall hearing about when it came out yet never had the opportunity to see what it was all about until now.

The story is quite good on its own but the performances by both Sean Penn and Christopher Walken make things even more powerful to watch unfold.

The film also has a great supporting cast who help make things even more gripping and suspenseful to watch.

Chris Penn, Mary Stuart Masterson, David Strathairn and Kiefer Sutherland all help add to things here with their performances even if none of them are the real focu of the story.

The fact that this film is based on real events helps make things even more impactful to watch as things progress.

The movie has a great score and Madonna’s theme song for the film ‘Live to Tell’ helps enhance things even more because it adds so much to the story.

Listen to both of them here:

The characters are developed quiet well here and the story allows us to get a much clearer understanding as to how easy it might be to get into certain circumstances, but getting out is never as easy afterwards.

Bottom Line – Story that works even better due to the powerful performances of both Penn and Walken. The supporting cast also helps keep things gripping with Sutherland Masterson, Penn and Strathairn adding so much to the story. This is based on real events which makes it even more impactful. The film’s score is great and the theme song sung by Madonna is quite powerful to listen to while watching these events unfold. The characters are developed really well and allow us to get an understanding how people can get into these kind of situations easily, yet find it so much harder to extricate themselves from it afterwards. Recommended!

MovieRob’s Favorite Trivia – When Christopher Walken works with guns in film, he checks them himself before each scene for safety reasons and his own personal ease. During the scene when Sean Penn sticks a gun in Walken’s face, Walken checked the gun before the scene started. Before the director had the chance to say “Action”, Penn ran off camera and shouted, “Give me the other gun!” He immediately returned to Walken and started the scene. This is the cut that made it into the movie, and Walken was really terrified. (From IMDB)