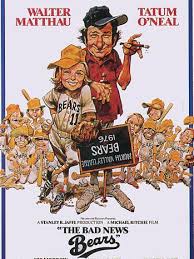 “This quitting thing, it’s a hard habit to break once you start.” – Coach Morris Buttermaker

My Take on it – This is a film that I saw as a kid and have always felt a strong connection to it since the premise was so relatable to me back then as it is now close to 40 years later.

As an 8 year old in 1982, I was part of a little league baseball team for 4 seasons and that helps me relate so much better to the events and characters of this film.

The story is told in a great way that helps keep things interesting throughout.

Walter Matthau is superb in the lead role as the washed up coach and we can see how his character changes over the course of the film.

Each of the players on the team are developed quite well and they each have very distinct personalities that let them each shine in different ways throughout.

Matthau has great chemistry with Tatum O’Neal as his surrogate daughter who also is able to pitch.

The film says so much about the culture of little league baseball and how they should be cultivating sportsmanship and camaraderie among the players instead of making things even more competitive for them.

Lots of the things that happen to these characters were quite nostalgic for me because it was able to transport me back in time to 39 years ago when I was fully immersed in the sport.

The story is presented in a really interesting way that is able to keep the message quite clear throughout.

Bottom Line – Great film that works really well. Matthau does a wonderful job in the lead role and is able to play this character in such a fascinating way. The players are all developed really well and they each have distinct personalities throughout. The baseball games are thrilling to watch and they say so much abut the culture of little league that is meant to culture sportsmanship among kids instead of competitiveness. Many of the things that happen to the characters are nostalgic for me as a former little league player in the early 80’s. The story manages to stay quite interesting and the message stays clear throughout. Recommended!

MovieRob’s Favorite Trivia – The film’s poster art was drawn by Jack Davis, one of the founding illustrators for MAD magazine. (From IMDB)