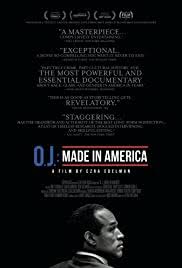 Initial Viewing Memories – I saw this film after it was nominated for an Oscar back in 2017 and it was such a powerful and draining film to watch because it is so comprehensive.

“[referring to his refusal to participate in racial tensions during the Watts riots] I’m not black, I’m O.J.” – O.J. Simpson

Brief Synopsis – Documentary that chronicles the events of the life of OJ Simpson while trying to get a better understanding of everything that happened to him.

My Take on it – This is the only film on this list that I have only seen once and that has much to do with the fact that this film is extremely comprehensive while at the same time it is nearly 8 hours long. They do an amazing job chronicling the life of this superstar who was able to do just about anything due to his friendly demeanor in public and the great way he has always been perceived. They go into lots of detail here allow the viewer to learn so much about his life and friendships over the course of the years. The way that they are able to give us interviews with many of the people involved in the trial and life of both OJ and Nicole helps shed so much light on the real persona of this man and the way that the events played out.  The film also explains the various politics and media influence on everything that happened both before and after the trial that had such an effect on everything. This is one of the very best and most comprehensive documentaries ever made! I am not surprised that this film was able to win an Oscar for Best Documentary because it is so poignant to watch. Highly Highly Recommended!

MovieRob’s Favorite Trivia – A few months after its Oscar win as Best Documentary, the Academy specifically outlawed “multi-part or limited series” to be included as nominees for the category in future editions. Though the director has said his intention was to release as it was, a full 7-hour project, and many other film festivals had presented in such way, ESPN showed it as a multi-part project in several parts which made possible for this rule change at the Oscars. (From IMDB)