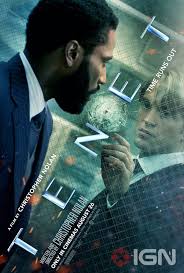 For this month’s next review for Genre Grandeur – Unreliable Narrator movies here’s a review of Tenet (2020) by Darren of Movie Reviews 101.

Thanks again to Lisa Leehey of Critical Critics  for choosing this month’s genre.

Next month’s genre has been chosen by Aaron Neuwirth of the Code is Zeek and we will be reviewing our favorite Horror-Comedy Films.

Please get me your submissions by the 25th of Feb by sending them to scaryfunnyaaron@movierob.net

Try to think out of the box! Great choice Aaron!

Tenet follows a CIA agent known only as the Protagonist (John David Washington) who finds himself willing to sacrifice himself for the job, sending him on a mission to learn the meaning of a symbol and a world ‘Tenet’. Using his skills the Protagonist must travel the world to learn the truth, working with Neil (Robert Pattinson) and learning what is making Russian gangster Sator (Kenneth Branagh) from creating something worse than World War III. This mission will see him need to learn about the possibility of moving through time in two main direction, being able to change the past, but seeing the future.

Tenet is the latest most ambitious project from Christopher Nolan where he continues to challenge the audience with ideas that will go beyond anything we would imagine. This might not come off as well as many other films of his, having seen it twice now, there are still moments that don’t add on up the levels I would like, maybe I can figure things out in the third viewing.

I have pick this as an unreliable narrator because the Protagonist is learning the story as he goes along, only it is his own story that he has lived through, with Neil knowing how everything truly unfolds, or at least that is how I have read that side of the film. We do have a wonderful cast that all perform excellently throughout the film. We have some of the best action sequences of the year, with the car chase being something you would have expected in the Matrix and the military battle at the end with people moving in both directions of the action.