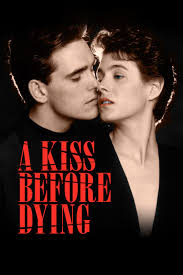 “She’s got two broken ribs, a broken jaw, and a bad concussion. We’re going to keep her overnight for observation.” – Nurse

Brief Synopsis – A student with high aspirations takes on the identity of an orphan in order to become a part of a wealthy and powerful family.

My Take on it – Intriguing thriller that works due to the performances of both Matt Dillon and Sean Young.

The way that the story moves along is a bit too predictable but it’s also enjoyable to watch it despite this.

Parts of the film’s plot have been used in other films with similar ideas, but this one still manages to work.

Matt Dillon does a wonderful job in the lead role.

He usually doesn’t play such evil characters as he does here but he does a really convincing job of making us believe that he could act like this.

The creepiness of his performance really resonates and raises the tension along the way.

Sean Young is also great in a dual role here despite the fact that her first role is far too small and underdeveloped.

MovieRob’s Favorite Trivia – Matt Dillon was actually James Dearden’s third choice to play the lead role. Originally Dearden wanted River Phoenix to play Jonathan, but Phoenix couldn’t relate to the material saying he couldn’t play someone so evil. Then Dearden approached Kiefer Sutherland who turned down the offer due to scheduling conflicts. Finally Dillon got the role and Dearden was so impressed with his performance that he later said Dillon should’ve been his first choice all along. (From IMDB)