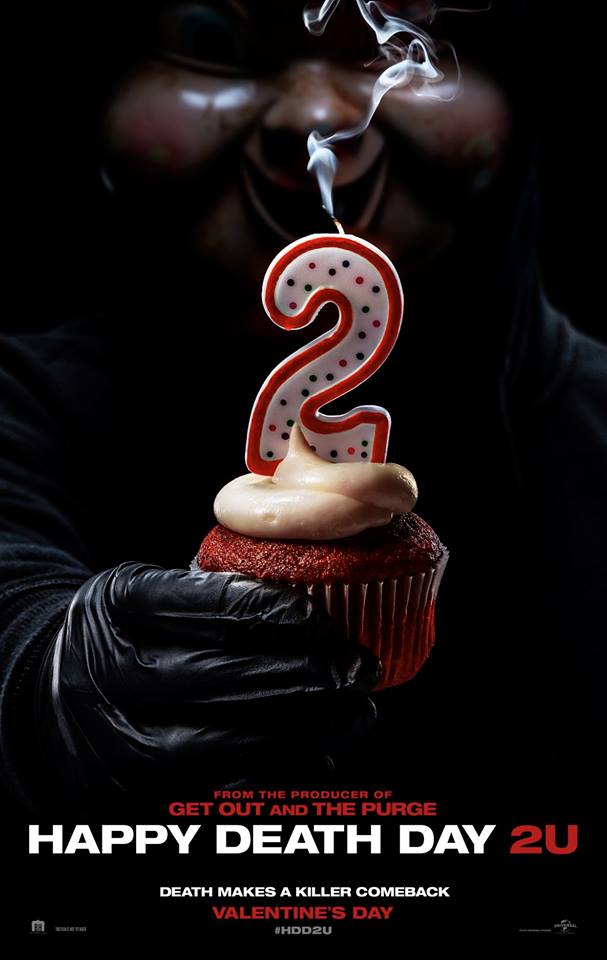 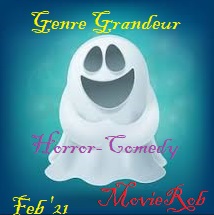 For this month’s next review for Genre Grandeur – Horror-Comedy Films here’s a review of Happy Death Day 2U (2019) by Aaron Neuwirth of the Code is Zeek. 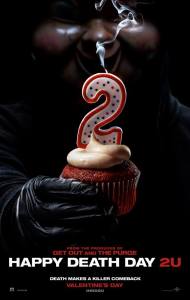 The idea of making a sequel to a time loop movie is both exciting and unusually cruel. Ideally, you already saw a character go through an eternal conundrum, only to emerge victorious in some way. Making the same person go through the ordeal again is the sort of twisted concept that hopefully, a smart film could pull off. Happy Death Day 2U approaches that level of cleverness, and I admire what it’s trying to do, much like how I wanted to appreciate the first film. Still, I continue to find myself out of step with the rhythm required to get a level of enjoyment that counters my disappointed take on the movie’s sense of its own logic. At least the characters still serve as true highlights of this series.

Happy Death Day 2U’s setup is the epitome of picking up where we left off, as the film once again throws us into the world of a college campus where characters are either goofballs, cartoon caricatures, or possible murderers stuck in a cycle. The entire cast, along with a few additions, is here for this new storyline, which finds Tree Gelbman (Jessica Rothe) once again having to relive the same day on repeat, until she can figure out why this time loop is occurring, and how to stop it.

If the first film was a slasher flick with an added sense of fantastical whimsy to shake things up, the sequel is a full-on sci-fi comedy that happens to have some horror elements. You could honestly forget this series began as a horror film because the masked killer takes the backseat to writer/director Christopher Landon’s efforts to dig into the nuts and bolts of how this time loop concept came to be. That’s a tricky way to go, as most of these stories hold off from providing any explanation. Weirdly enough though, it works. 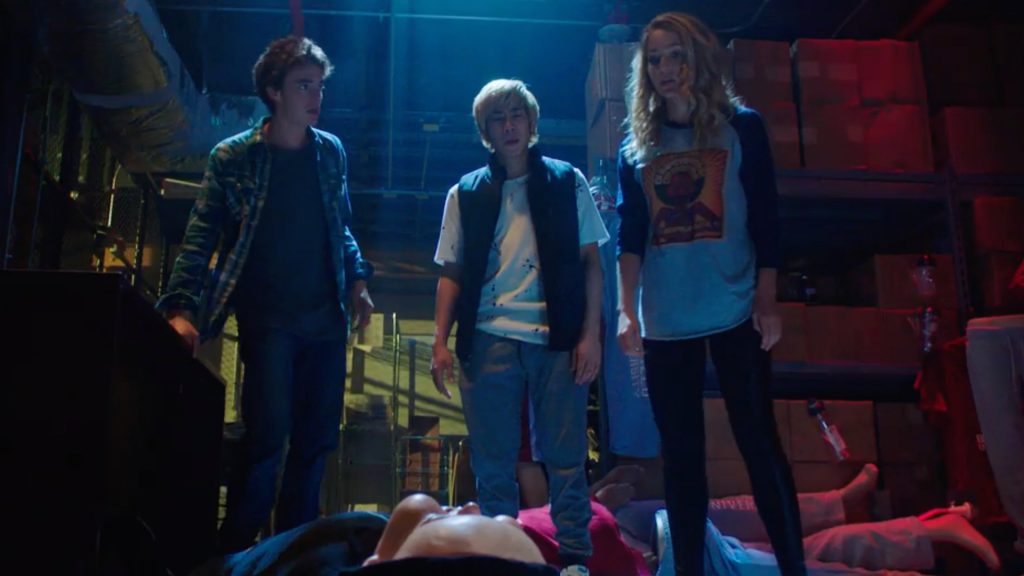 Part of the success for setting up this premise comes from having Tree remain a supporting character for the first act of this film. Phi Vu’s Ryan, roommate to Israel Broussard’s Carter, is the character we follow in the beginning, allowing the movie to have fun acknowledging that it’s a sequel, while cleverly functioning as a way to get a lot of the expositional heavy-lifting out of the way. This portion is fast-paced and humorous, putting me to the point of thinking I was too hard on the first film.

Once Tree becomes the main focus of the story again, Happy Death Day 2U is off and running in ways that I could appreciate from a character standpoint, but lose patience with when it comes to praising the story being told. I want to like this film more, as it continues to build great moments for Rothe. In addition to the physical humor required for death montages and general silliness, there are well-handled introspective moments and emotional beats that play to the bigger idea of seeing how a person can grow, even if they are stuck within the same 24-hour cycle. That’s complicated further by placing Tree in a timeline where things are perhaps better than where she was, allowing for even more character exploration.

Also worthwhile are the efforts of the supporting cast, who continue to have the tricky job of playing many of the same moments over and over, but giving different spins on how to reenact the same day. That’s less of a focus this time around, as Happy Death Day 2U even acknowledges that it’s essentially cribbing from Back to the Future: Part 2 (with some Primer thrown in), but the cast is still having a lot of fun here. I only wish the shortcomings didn’t stand out so much to me. 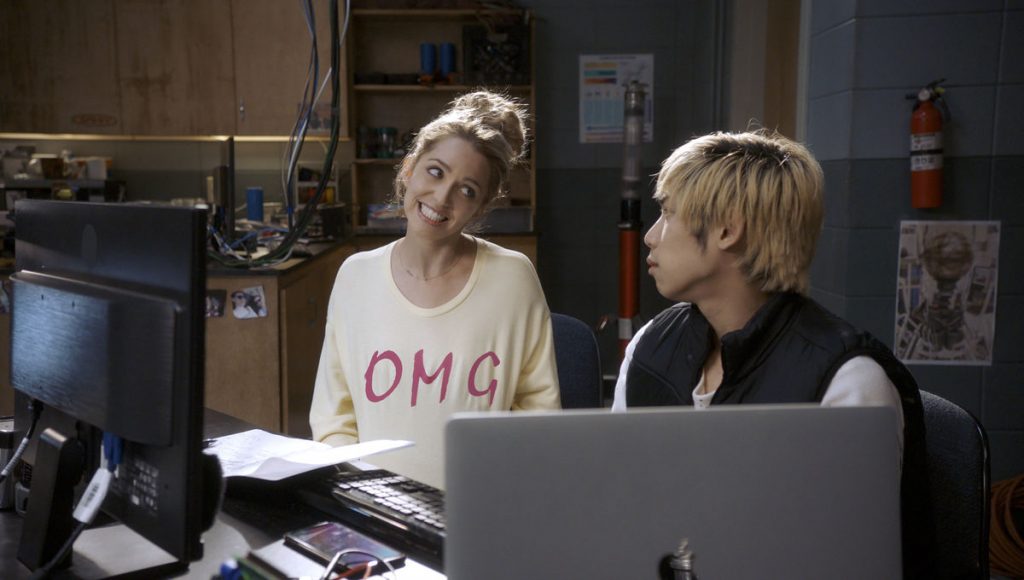 When not focused on character arcs, I have a frustrating time watching the movie attempt to juggle its tone. Sure, this sequel is more a full-on comedy than last time (and I appreciated the efforts to have a more extensive variety of wacky deaths), but some extended bits do nothing for me and arrive after some serious scenes, which do not sit well. We also have the return of the magical illness Tree only suffers from when convenient for the plot. Time travel logic does not bother me, as the movie understands its goofy premise enough for it to make a level of sense. However, playing fast and loose with what the stakes really is pushing it.

Not helping is how aware the film seems to be of its cleverness. There’s a way to handle this well, as at least 2 Scream movies knew what they were doing, let alone films like Cabin in the Woods, Behind the Mask, or Funny Games. The Happy Death Day movies, however, find themselves tiptoeing over the line of self-satisfaction a bit too often. Am I taking it all too seriously? Perhaps, but I’m still feeling pulled out of the movie way too often, despite a desire to want to enjoy what should work as an audience pleaser.

Of course, the first film was a crowd-pleaser, and working with the low Blumhouse Productions budget, it’s not as if much seems to be at stake as far as original horror movie concepts that deliver on placing a game cast within a high concept premise. I only wish I was having as much fun as others around me. As it stands, this genre-bender is bending too far backward for me to be a bigger fan of what it attempts. Perhaps I’m doomed to be stuck in a time-loop of wanting to enjoy these movies, but for now, I’ll just move on to another film on a new day.