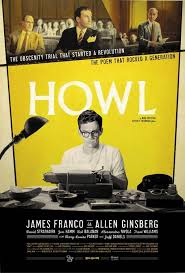 “There’s no beat generation. It’s just a bunch of guys trying to get published.” – Allen Ginsberg

My Take on it – Really boring film that just doesn’t manage to keep things more engaging along the way.

Listening to James Franco read off Ginsberg’s most famous poem over the course of the film is a waste of time and energy.

The film tries to use animation to help explain the meaning of the poetry that is being recited, yet it fails to find a way to make the viewer care about the character or the poem itself.

Ginsberg was a profound and groundbreaking poet at a time when the world was changing and his voice was integral to making those changes happen, yet this movie doesn’t give us a real opportunity to see or feel that based on the way it is presented which despite being unique, is extremely boring way to tell a story.

The poem truly is more profound that that, but unfortunately that cannot be realized by the way that this film presents it.

The movie also depicts the court case over whether his work was truly obscene or not, but even those scenes aren’t able to make this film more interesting to watch unfold.