This review is part of the Monthly ABC Film Challenge over at Movie Reviews 101. This month’s theme is Favorite films. 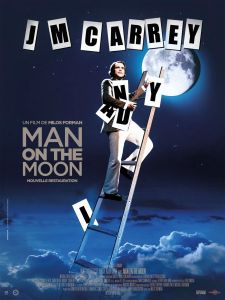 “See, I don’t want to go for cheap laughs. I want real gut reactions. I want the audience to have gone through an experience. They love me, they hate me, they walk out. It’s all great.” – Andy Kaufman

Brief Synopsis – Biopic of comedian Andy Kaufman whose humor was on such a very different level than everyone else’s.

My Take on it – Amazingly poignant biopic that resonates so well no matter how often one watches it.

Jim Carrey is superbly cast in the lead role of Kaufman and is able to personify this unique comedian with amazing comedic timing.

The life of Kaufman was rife with controversy and many of the antics that he performed over his career are still left unclear as to whether they were real or just created by him for laughs.

The biggest problem with this film is that there is so much that needs to be included in order for us to get a clear idea of Kaufman’s life, but a two hour runtime is somewhat limiting, so there are lots of montages instead of going into more detail of many of these segments.

There is no question in my mind that Kaufman was a comic genius even if he wasn’t always understood by everyone around him.

That’s partly why Carrey is such a great choice in the lead role because he also fits into that same category.

This is one of his best roles (if not THE best) which shows his range as an actor, comedian because we can really feel how he is able to embody Kaufman’s wacky sense of comedy.

The music is great and helps make things even more enjoyable especially the songs by R.E.M. about Kaufman’s life.

I love this film and laugh and cry so much every time I see it!

MovieRob’s Favorite Trivia – During filming, it was widely reported that a fight ensued between Jerry Lawler and Jim Carrey. It was later reported the whole story was fabricated to promote the movie. But Lawler has since revealed that the story was true. Carrey was so into his character that he constantly harassed Lawler off-camera. At one point, Carrey spit in Lawler’s face and Lawler grabbed Carrey’s neck. The altercation was broken up, and Carrey demanded that Lawler be fired and that his scenes be re-shot. But Carrey later relented. According to Lawler, when they later filmed the scene in which he slapped Kaufman on Late Show with David Letterman (1993), he slapped Carrey much harder than he ever slapped Andy as revenge. (From IMDB)