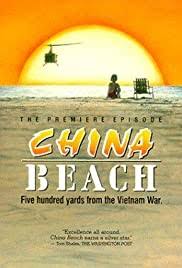 This is the Second of three posts dedicated to the 7th Annual Favourite TV Show Episode Blogathon being held over at A Shroad of Thoughts.

Brief Synopsis – The life of soldiers and support staff at an army evacuation hospital in Vietnam during 1967.

My Take on it – Great pilot episode for a TV show that shows the potential of such a group of characters.

There were numerous other TV shows and movies that depicted this kind of life during war including MASH and Tour of Duty .

The characters are quite eclectic and help give us an even wonder perspective on the various kinds of people who found themselves in places like this during war time.

The cast is also great and Dana Delaney helps keep the story quite grounded throughout.

She is truly the heart and soul of this pilot (and of the series as a whole) and helped make it so successful through its entire run.

The story also helps the viewer get a more intimate look at different aspects of war that are seen from slightly afar as the numerous story lines unfold here sometimes in directions that one never would expect.

MovieRob’s Favorite Trivia – The episode won an Emmy Award for Outstanding Costuming for a Series. (From IMDB)