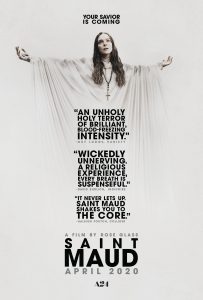 Religious horror intrigues me, as the best examples feel like filmmakers either wrestling with their faith or examining it from a more clinical level and finding terror. It can also extend beyond the traditional parameters of horror. Exorcism or films about evil cults tend to encompass much of what can be offered, but Saint Maud, the debut film from writer-director Rose Glass, has something else on its mind. Serving as a look at obsession spurred on by guilt, this has the fingerprints of an A24 release all over it. It’s deliberately paced, intensely focused on character, and makes the most of limited means. However, even when considering other films Saint Maud can be matched up with, there’s plenty here that impresses, with enough sinister atmosphere to spare.

Set in the English seaside town of Scarborough, stated early on as not one of the more desirable places to retreat to, Morfydd Clark stars as Maud, a newly devout Roman Catholic, who has taken on the position of a hospice nurse. Her patient is a dying soul, Amanda (Jennifer Ehle), once a dancer from the U.S., who is now terminally ill with stage four lymphoma. With fear of what’s coming next, Maud makes it her mission to save Amanda’s soul, only for the troubles of Maud’s own sinful past and her current mental state driving her towards more extreme directions.

My interest in religious horror does come at a cost. Even while the best examples find ways to relate to those of all backgrounds, there can be a disconnect in comprehending the intense nature of faith. Perhaps that’s why, as a Jew, films about possession don’t tend to affect me as strongly (there’s a lack of Jewish-themed horror in general, though I have seen the upcoming The Vigil, which satisfies in many ways). Of course, there’s still something to watching either the film’s hero or villain push themselves as far as they do.

That’s important given the character’s requirement to act in a certain way and go to fanatical lengths to make their point. However, there are ways around that not requiring an outsider character to be the focal point to get an audience to understand. With Saint Maud, it’s less about justifying the choice of religion to explain Maud’s ways and more the takeaway of what’s she’s experiencing. One does not have to have faith to relate to the idea of someone finding ecstasy in their connection to something bigger than themselves. That said, the context of Maud’s state only adds to the imagery and source of pain, as the film descends further into body horror as it goes along.

With artist William Blake’s work as one of a few reference points, outside of some clear cinematic influences, there’s plenty of opportunity to take in environments dominated by sturdy browns with a home, the aquatic green of the neighboring sea, and other striking elements. And yet, Glass deliberately washes over these things with fluorescent lighting and dull sunlight. Unsurprisingly, the film is at its most evocative when danger lurks nearby. Matters only intensify when Adam Bzowski’s moody and string-laden score comes into play to further emphasize the path being taken toward elevated distress cloaked as virtuous efforts made by Maud.

The structure is of particular interest, as the film seemingly presents a sort of love triangle based around Maud’s devotion to Amanda and the sudden arrival of Carol (Lily Frazer), whom Maud deems as a distraction doubling as a violation of doctrine. However, rather than emphasize a game of one-upmanship (and Clark’s performance suggests this could have also been quite entertaining), a shift in gears leads to further weight on Maud’s status as a loner losing her touch with reality.

It’s in this film’s middle section that the viewer begins to wonder just how far down the path Maud is to some sort of resolution that could go anywhere beyond a further unnerving escalation. Of course, being from a studio that brought along films and future screening pairings The Witch and First Reformed, the hope one may have in Maud receiving the rewards for her pious ways will likely come with a twist of some kind.

Will the results satisfy? Recent independent horror films seem to be lumped into a pile for daring to be withholding when it comes to breaks in tension in the form of jump scares or something else to move the plot along. At 84 minutes, Saint Maud still manages to take its time without always doing the most to bring the viewer right in line with Maud’s perspective. Of course, it may be a matter of Glass only wanting us to connect so much with the character to maximize the level of tension being built.

Having waited quite some time to see Saint Maud, after the film was delayed for almost a full year due to the Covid-19 pandemic, there’s plenty of successful work on display that I was happy to now see. The assured patience in the storytelling is not too overwhelming to look past strong work delivered by Clark and Ehle. The ramp-up in clear horror imagery in the latter moments of the film is also enough to feel like the journey made the intended impact when all is said and done. Self-inflicted pain also goes over as well as one expects in a film like this, which is certainly one way to keep the grim mood apparent. Perhaps not soul-shattering, but Saint Maud still explores some nightmarish depths.