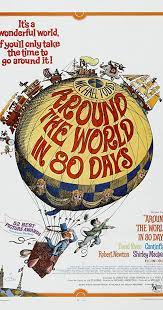 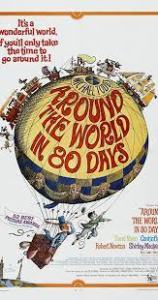 Brief Synopsis – An eccentric British academic makes a bet that he can traverse the world in less than 80 days.

My Take on it – Such a fun film that stays entertaining the whole way through.

The fact that this film created the concept of cameo appearances in films is so fascinating especially given the number of familiar actors and actresses who pop up in this story.

David Niven is great in the lead role and makes us truly believe the eccentricities of his character the whole way through.

The various adventures that Phileas Fogg and his servant Passepartout experience along their journey are great but the fact that even at 3 hours this film feels too short is what hurts things too much.

The novel this is based on is rich with so much detail about their various encounters along the way, but due to their being so many vignettes that they wish to present here, it all seems far too truncated and rushed which is such a shame.

I would love to see a 6 hour version of this film with the same actors because it would be able to properly tell us each of their adventures along the way.

There is constantly an epic and international feel for this film which helped open the flood gate for these kind of films in the future.

MovieRob’s Favorite Trivia – This movie featured the longest closing credits sequence at the time, at six minutes and twenty-one seconds. All of the credits are shown at the end. The title is the last credit. (From IMDB)

Genre Grandeur Worthy? – Comes extremely close, but as great as this film is, there is too much ground for them to cover in just 3 hours and it all seems far too rushed.