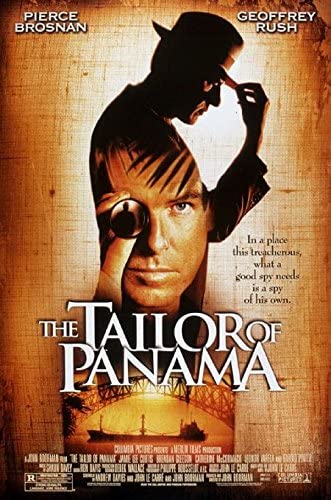 “When they took Noriega out, I said to myself, Harry, they got Ali Baba, but they missed the forty thieves.” – Harry Pendel

Brief Synopsis – A British agent in Panama recruits a local tailor to work for him in a complex espionage plot.

My Take on it – Great premise that just doesn’t work well enough.

The cast superb and that is part of the problem because much more is expected from all of them.

Geoffrey Rush, Pierce Brosnan and Jamie Lee Curtis all do nice jobs with their characters, but they aren’t given enough to work with.

Brosnan plays a character who’s profession is one he has played often, but the way that his personality is constructed is far too different from what we have come to expect from him and this also takes a lot away from how the story moves along.

The story is based on a novel by John le Carré, but I think the translation to the screen just doesn’t stay thrilling or engaging enough along the way.

The plot moves along at an interesting pace, but it’s as fascinating to watch unfold as I had hoped.

The way that things play out is quite timely for when the film came out, but two decades later it just doesn’t work well enough.

MovieRob’s Favorite Trivia – According to director John Boorman’s audio commentary, Geoffrey Rush smokes, whereas Pierce Brosnan doesn’t, while Brosnan’s character Osnard smokes, and Rush’s character Harry doesn’t. So in the breaks between scenes, often Brosnan would put his cigarette out at the same time Rush would light up. (From IMDB)