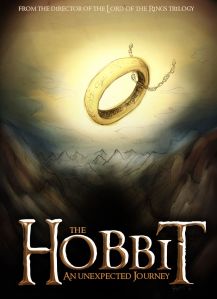 “You! What were you doing? You nearly got yourself killed! Did I not say that you would be a burden, that you would not survive in the wild and that you have no place amongst us? I’ve never been so wrong in all my life. [Thorin embraces Bilbo]” – Thorin Oakenshield

Brief Synopsis – A peaceful Hobbit is recruited to join a party of Dwarves on a dangerous journey across the land in order to recover their lost Kingdom.

My Take on it – I have always loved the book that this is based on and looked forward for so meant years to see it eventually on the screen.

They do a great job of adapting the story even if it isn’t done as well as the first trilogy of Lord of the Rings was.

The story is uplifting and fun and this first chapter is able to develop these characters quite well throughout.

As with the previous trilogy, the special effects are what make this film so fascinating to watch.

The way that they are able to make us believe that these characters are different sizes based on their race works so well in helping to develop and create such a powerful and intriguing story.

Martin Freeman is great in the lead role of Bilbo and allows us to case so much about everything that he does along his journey.

The story plays out really well especially when one is aware of the history (and future of Middle Earth).

This is my favorite of the three films in this series because it stays the closest to original story without too many extra scenes that would make things drag along.

It also spends the most time with the development of the characters which is great.

MovieRob’s Favorite Trivia – Peter Jackson claims that when he called Sir Christopher Lee to invite him to the premiere of The Hobbit: An Unexpected Journey (2012), Lee responded, intimidatingly, “Am I still in the movie?” Lee had originally been slated to appear in The Lord of the Rings: The Return of the King (2003), but his scenes were cut from the theatrical release, which caused the actor and director to have a brief falling out. The scenes were restored in the extended edition, though. (From IMDB)

One thought on “Genre Guesstimation – The Hobbit: An Unexpected Journey (2012) – Encore Review 2”