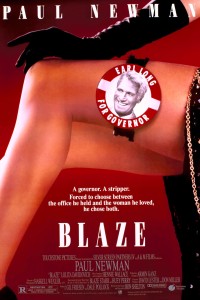 Brief Synopsis – A controversial Southern governor gets involved with a stripper which begins to jeopardize his future political career.

My Take on it – This is a film that I’ve been interested in seeing for years and finally got the chance to do so.

Paul Newman was a superb actor and I had much hope that this film would once again show his great acting abilities.

Unfortunately, the premise of the film and his performance are such a let down.

the story moves along at a farcical pace and there is no reason to sympathize with any of the characters or with anything they do here.

The story takes certain aspects to the limits and beyond and that takes away from keeping things interesting or even engaging to the viewer in so many ways.

The fact that this is based on real events makes it even more frustrating to watch because there is so much more hope that things would be more enjoyable than it truly is.

MovieRob’s Favorite Trivia – The year this film was shot there was an election in Louisiana. One of the items to vote on was bill that had many different state projects. It was defeated the same day the crew was filming the funeral scene overnight in the Capital Building in Baton Rouge. The crew had to leave before all the props could be removed, including the coffin. The defeated bill was laid in the coffin by someone before the next daily legislative session began. (From IMDB)